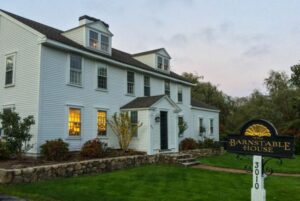 Built-in 1716, The Barnstable House was located on Old Kings Highway, a vein of road running the length of Cape Cod—and one of the most haunted stretches of highway in North America.

Barnstable House has long been reputed to be haunted, and seances have been held at different times on the premises. The name “House of Eleven Ghosts” was bestowed by a psychic, who said that 11 different entities were on the premises although there is no record of their specific identities.

Barnstable House has passed through numerous owners in its nearly 300-year history. It was framed in Scituate, Massachusetts, shipped to Barnstable, and constructed by James Paine in 1716. Paine’s grandson, Robert Treat Paine, was a signer of the Declaration of Independence.

By the time of the American Revolutionary War, the house was owned by Edmund Hawes. On October 1, 1776, Hawes sold it to Elisha Doane, who paid for it in worthless continental currency. Distraught, Hawes committed suicide by hanging himself from a tree on the property.

By 1799 Dr. Savage had become owner of the property. He was married in 1776 to Hope Doane, daughter of Elisha Doane.

Dr. Savage was, according to Simeon Deyo, “very peculiar in his manners, and when the stagecoach was passing, would ascend a large rock, and in sepulchral tones announce himself as physician and surgeon.”

Dr. Savage owned and occupied the dwelling until his death in 1831. After the passing of Dr. Savage, the house passed to Hope Savage Shaw, daughter of Dr. savage. Hope Savage Shaw was also the second wife of Chief Justice Lemuel Shaw, Chief Justice of the Massachusetts Supreme Judicial Court (they married in 1828).

Hope Shaw had a second claim to fame as she was the stepmother-in-law to the famed Moby Dick author, Herman Melville who is rumored to have written portions of Moby Dick while residing at The Barnstable House. The house was sold by Hope Shaw (and her brother) in 1832 to Abner Davis.

After Abner Davis’ death in 1839, the property was inherited by his wife, Nancy and later by their son, Adolphus, a Boston shipowner. During this period, the house was occupied by Captain John Grey, who is believed to still “occupy” the house.

Barnstable House became an inn and restaurant during the 1900s. There was a revolving door of owners and names, among them the 1716 House, Old Jail House, The Sign of the Blue Lantern, Andrea Doria Inn, Captain Grey’s, and, ultimately, the Barnstable House, its present name. In the 1980s, the house was turned into a commercial office building, its present use.

For much of its history the Barnstable House has been the home of ghosts, some of them known and some of them anonymous. One known ghost is Edmund Hawes, an owner who committed suicide over money troubles by hanging himself from a tree in the yard in 1776.

Another ghost is a little girl, Lucy. According to legend, she died in the well to the underground stream that runs beneath the house. Her mother is a ghost, too. She sits in a rocking chair inside the house, mournfully waiting for her daughter to come back. 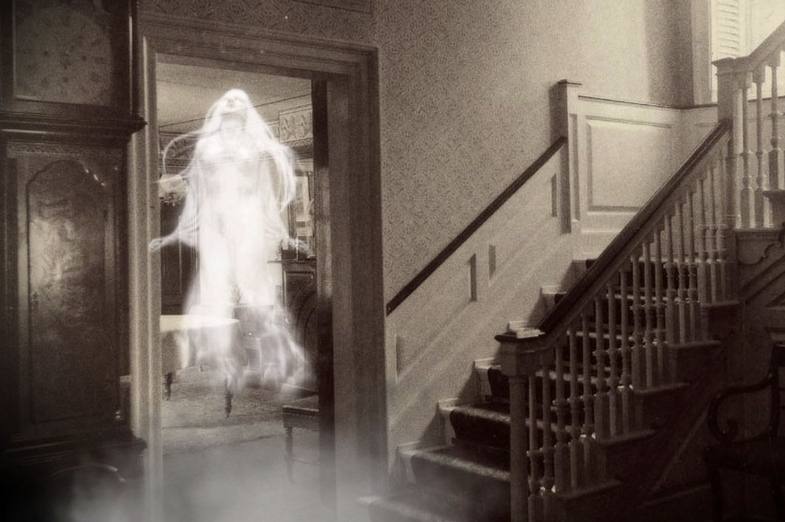 The ghost of Captain Grey is said to lurk about the basement. He is known as “the door slammer” after his favorite activity—slamming open doors shut without apparent cause.

The most famous incident took place in 1974 when a fire broke out in the house in the middle of the night. At that time, the fire department in West Barnstable, Massachusetts, received a distressing alarm. Two fire trucks immediately raced to the home.

Firefighters found the large, white-clapboard colonial structure ablaze. The house had not been a private residence for many years, but it was now a restaurant. At 3:00 a.m., it was, of course, closed.

Looking up, several firefighters saw a woman standing in one of the upstairs windows. They rushed inside, but when they got to the room, no one was there. In fact, the woman was nowhere inside the burning house.

But down on the ground, other startled firefighters saw her. Clothed in a long white dress, with long blonde hair blowing about her shoulders, she floated about two feet above the snow-covered ground. She looked sad. “Where is the Dalmatian?” she asked. Before anyone could react, she vanished into the smoky air.

There was no dog on the property or in the house. The woman then vanished. Mediums who said they contacted the ghost said her name was Martha. However, there are no historical records to validate the name. One possibility is that a guest named Martha stayed there during the house’s days as an inn.