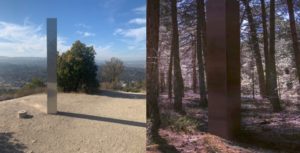 Last week, many media outlets talked about the appearance of mysterious monoliths. One was found in Utah and the other was found in Romania. Both monoliths disappeared without a trace literally overnight.

It was clear that the structures were dismantled at night. In addition, many were surprised by the fact that they were cut with the help of an autogen, although it was much easier to just get the pieces of iron out of the ground.

And while everyone is arguing about what happened last week, another monolith has emerged in California. It is located at the top of the Pine Mountain, which is located in Atascadero. At almost the same time, a monolith was discovered in France in the Gallic forest.

Got up close and personal with the mystery California #monolith today. Anyone else been out to see it? pic.twitter.com/8pOimhQiyY

California resident Gary Lyons says he came upon the new monolith early Wednesday during his daily hike on Pine Mountain.

“I guess this is a thing now, right?” he says in a brief video showing the object. “Be prepared to see these everywhere.”

The objects’ origins and true purpose remain unknown, but the sudden trend is starting to echo the crop circle phenomenon of decades past.

It’s also inspiring a similar mix of fascination, skepticism and theories about the supernatural.

Internet boards such as Reddit and 4chan have hosted all sorts of speculation about the objects. Are they art? Are they alien? Or are they simply pranksters trying to capture the general public’s imagination during a weird, scary and locked-down 2020?

Caught the biggest catfish in the world