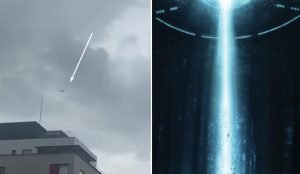 On April 1, 2022, a black UFO was captured above the Asakusa Kaminarimon temple in Tokyo, Japan.

The UFO emitted a circular beam of light visible especially well in the photographic negative, and then disappeared from the sight of the witness in a split second.

Witness description: April 1, 2022 Taito-ku, Tokyo Discovered a UFO moving at high speed above Asakusa Kaminarimon, and confirmed that it was emitting a circular light around the aircraft.

If you look carefully then you see that the UFO emitted a circular beam of light, something like an energy field, around the craft, before it disappeared in a split second.

The object moved quickly over the roof of the temple. This type of movement is a bit like civilian drones. The quality of the video below does not allow any hypothesis to be drawn as to the identity of this vehicle.