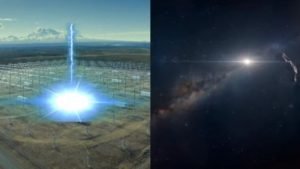 Scientists at the University of Alaska Fairbanks (UAF) and NASA want to examine the 2010 XC15 space rock to test their preparation against Apophis. This dangerous asteroid might hit our planet in 2029. It is believed that on April 13, 2029, Apophis will be 10 times closer to Earth than the moon, reports ufosightingshotspot.blogspot.com.

The researchers will use the HAARP (High-frequency Active Auroral Research Program) array to shoot 9.6 megahertz radio waves at the 500-foot-wide 2010 XC15 asteroid.

HAARP is a government-funded research program that generally studies the ionosphere (part of Earth’s atmosphere at 50 to 400 miles above the surface). However, this will be the first time it will be employed to examine an asteroid.

Astronomers have been shooting radio waves in space to spot asteroids; figure out their shape, trajectory, structure of their surface, and many other characteristics. For this purpose, they use radio waves having frequency ranges either in the S-band (2,000 to 4,000 MHz) or X-band (8,000 to 12,000 MHz).

Interestingly, for probing 2010 XC15, the researchers are using waves of much lower frequency (9.6 MHz) and longer wavelengths because, this time, they don’t just want to explore the surface of the asteroid. They want to know what’s inside.

Information about the interiors could reveal important details about the damage that an asteroid could cause and help scientists figure out an effective counter-strategy.

Flashback: On December 27, the distance between 2010 XC15 and Earth will be around twice the distance between Earth and the moon. HAARP will be shooting 9.6 million chirping radio waves every second to this distance, and this process will be repeated every two seconds.

This test is crucial because if the researchers can successfully examine 2010 XC15 using low-frequency radio waves at such a long distance. Then they could easily employ the same method to analyze Apophis.

Although the 2029 asteroid is most likely to miss Earth, in case it doesn’t, the consequences could be catastrophic.

For instance, in response to an FAQ that explores the possibility of Apophis hitting Earth, The Planetary Society wrote on its website, “Apophis would cause widespread destruction up to several hundred kilometers from its impact site. The energy released would be equal to more than 1,000 megatons of TNT, or tens to hundreds of nuclear weapons.”

Moreover, Apophis is just one asteroid. There will be many asteroids that will pass by, or might even hit, Earth in the future. Low-frequency radio waves could play a key role in understanding the composition of these mysterious space objects and, at the same time, help us strengthen our planetary defense mechanism.

However, before all this happens, HAARP and its low-frequency radio waves will have to pass their first test, which indeed has been carried out on December 27.

If the experiment worked, the pulses also reached asteroid 2010 XC15, which passed by Earth on Dec. 27th at a distance of 770,000 km. Researchers from NASA and the University of Alaska pinged 2010 XC15 with shortwave radio signals to probe the asteroid’s interior–a first if it worked. They are still waiting for confirmation that the reflections were received, as expected, by antenna arrays in California and New Mexico.

They say that the 2029 Asteroid Apophis is most likely to miss Earth, but the fact that they perform this first test indicates that they are not 100 percent sure whether it will hit the Earth or not.

Also interesting is that they want to know what’s inside asteroids, such as Apophis, but what will happen if they discover that the inside of an asteroid is made up of advanced technology, a hollow spacecraft built by aliens and disguised as an asteroid, like the infamous space rock ‘Oumuamua’.