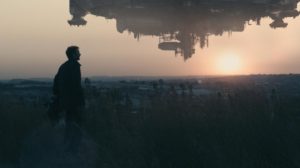 Claude Edwards of Tuscumbia, Missouri, was a hard-working 64-year-old farmer and he didn’t believe in flying saucers or little green men. That was until the early morning of February 14, 1967. Edwards began the day as always, with his morning walk from his home to the barn. As he came over a small hill and was able to see his fields he knew this day was going to be very different.

The first thing that Edwards noticed was that all of his cattle were at one end of the field, all of them looking in the same direction. Edwards looked to see what had captured the attention of his herd and gazed upon an amazing sight.

It was one of those flying saucers, sitting in his field, surrounded by a group of little green men. The aliens were about three feet tall and moving about very quickly. The farmer said the little green men had big black eyes or perhaps were wearing goggles. Where the nose and mouth should have been was a protrusion that Edwards believed may have been some type of breathing device.

As for the saucer, a giant mushroom, about 18 feet in diameter. It had oval-shaped port holes through which Edwards could see a wide range of colored lights that seemed to be rotating. Not being armed, Edwards picked up a couple of rocks and approached the saucer.

The farmer later said that he planned to throw the rocks at the saucer in an attempt to puncture the saucers skin and prevent it from flying away.

His plan failed because as he got about 15 feet from the craft he ran into an invisible force field. He said it was like walking into a wall and he was not able to get any closer. At some point the little green men got back into the saucer and it began to move.

The saucer slowly lifted from the ground and headed off, gaining speed as it went until out of sight. Edwards never reported seeing the strange visitors again and there were no other witnesses, except a herd of cattle who remained silent.