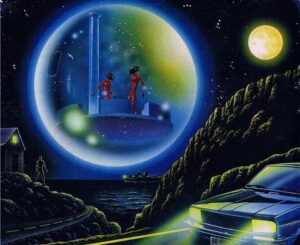 One of the most bizarre reports of unusual phenomena occurred in 1976 in the Spanish Canary Islands. Although the case features a most extraordinary description of aliens and their craft, the occurrence is extremely reliable in that it includes multiple witness reports which agreed in all aspects of the case.

The phenomenon began on the night of June 22, 1976, as residents of Tenerife, La Palma, and La Gomera began reporting the sighting of unusual lights in the sky. These lights and their maneuvers were different from anything residents of the area had seen before.

Newspaper headlines the next morning proclaimed that “thousands of people” had witnessed a “spectacular phenomena” which lasted “twenty minutes.” The most sensational aspect was the sighting of the aforementioned “sphere” occupied by strange alien beings. 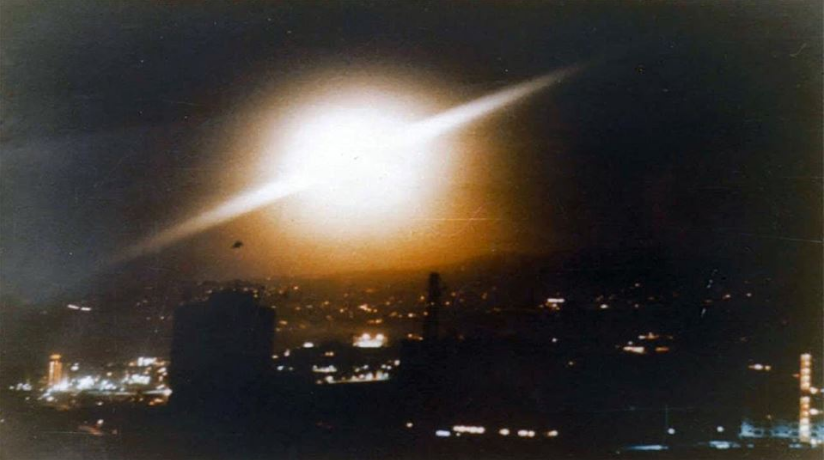 Three days later, the Commanding General of the Canary Island Air Zone named an “Investigative Adjutant” to make sense of the events. His findings were forwarded by a Spanish Air Force General to journalist J. J. Benitez in 1976, and the details of the case quickly reached beyond the scope of the Islands to the outside world. Benitez’s investigation would be the basis of his book, “UFOs: Official Documents of the Spanish Government.”

The case would regain momentum in 1994, when files of the investigation were released as part of the unveiling of Spanish records, a type of “Freedom of Information” act.

The 1976 report was massive, containing over one hundred pages of testimony, evaluations, drawings, and more. The official Air Force report of the incident was headlined by depositions of fourteen witnesses. A type of standard was established with witness reliability based on social status.

A doctor’s report was considered a high priority, whereas a common laborer’s report was given little, if any, weight. In this particular case, this unfair standard did not take away from the acceptance of the facts, since all involved were in full agreement as to what they saw. The report was very detailed, and presented chronologically.

The initial report of the Canary Island UFO came from the Navy’s armed escort ship, the “Atrevida.” The ship was located off the coast of Fuerteventura Island. The ship’s captain gave a detailed report of what he and his crew observed at 9:27 P.M. on June 22. 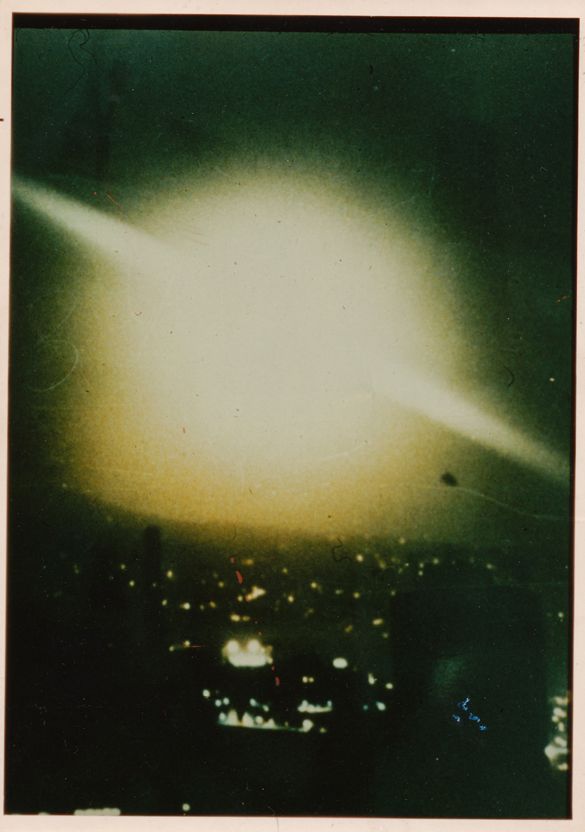 The entire crew saw an extremely bright yellow-blue light moving from the shore in the direction of the ship, located three and a half miles at sea. Several of the crewmen at first thought they were seeing a conventional aircraft with its landing lights on.

The lights soon faded, and a type of beam began to rotate, similar to a lighthouse effect. Afterwards, an intense halo of yellow and blue could be seen from the fantastic craft. Amazingly, the crew watched the craft for a full forty minutes.

The craft seemed to be playing tricks with its lights, as they constantly changed from one form to another. Even though the light show was observed for a long period of time, no signature was evident on the ship’s radar of any flying craft.

“At 21:27 (Z) hrs. on 22 June, we saw an intense yellowish-bluish light moving out from the shore towards our position. At first we thought it was an aircraft with its landing lights on. Then, when the light had attained a certain elevation (15 – 18 degrees), it became stationary.

“The original light went out and a luminous beam from it began to rotate. It remained like this for approximately two minutes. Then an intense great halo of yellowish and bluish light developed, and remained in the same position for 40 minutes, even though the original phenomenon was no longer visible.

“Two minutes after the great halo, the light split into two parts, the smaller part being beneath, in the center of the luminous halo, where a blue cloud appeared and the part from which the bluish nucleus had come, vanished. The upper part began to climb in a spiral, rapid and irregular, and finally vanished.

“None of these movements affected the initial circular halo in any way, which remained just the same the whole time, its glow lighting up parts of the land and the ocean, from which we could deduce that the phenomenon was not very far away from us, but was close.”

Only a few minutes later, this same object was seen by residents of Canary Island proper. The bulk of the sightings were by citizens of three villages; Galdar, Las Rosas, and Agaete. A cross section of professions were involved; medical doctor, schoolteacher, farmer, taxi driver, and housewife, among others.

A thorough search of records by the Investigator Adjutant determined that there were no reports of “aerial traffic or military exercises at the time of the reports” that could possibly account for the sightings of the unknown object . The Adjutant, for the sake of clarity, divided the investigation into two different categories. 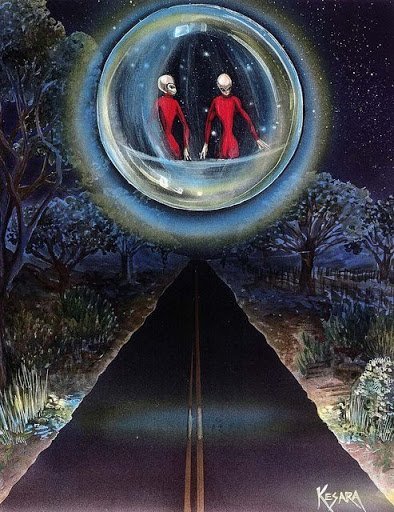 The Investigator General’s last word on the subject was: “The fact that a very strange and peculiar aerial phenomena occurred on the night of 22 June is a true and proven fact, as incredible as its behavior and conditions may seem.”

The incredible account of the sphere was submitted by Doctor Francisco Padron Leon, who lived in the city of Guia. His report is the most voluminous of the entire investigation. His background was thoroughly investigated, and he was found to be an upstanding, sane professional, whose word was considered truthful.

Padron had been summoned to make a house call, and commissioned a cab to take him to the location; the town of Las Rosas. As they rode along, the doctor and cab driver were engaged in light conversation. Suddenly, the car lights pointed out a slightly luminous object in the shape of a sphere.

The object was either landed, or hovering just above the ground. The object was made of a totally transparent and crystalline-like material. The doctor and driver both observed stars through the sphere. The object was bluish in color, with a radius of about 100 feet.

The lower part of the orb contained a platform of aluminum-like material with three consoles. At each side of the center there were two huge figures from eight to ten feet tall. They were dressed in red, and always faced each other. The beings were humanoid in shape, with large heads covered with a type of helmet. The doctor, hardly believing his own eyes, asked for confirmation from his cab driver.

“Are you seeing what I am?” he asked.
The driver exclaimed, “My God! What is that?”

The cab was only a short distance from the patient’s house, and upon arriving, the doctor observed a type of bluish smoke coming from a tube rising through the center of the object.

“We were talking about hunting… as we entered the last part of the road, the car lights pointed at a slightly luminous sphere that was stationary and very close to the ground, although I can’t say for sure if it was touching it.

It was made of a totally transparent and crystalline-like material, since it was possible to see through it the stars in the sky; it had an electric blue color but tenuous, without dazzling; it had a radius of about 30 m. [100 ft.], and in the lower third of the sphere you could see a platform of aluminum-like color as if made of metal, and three large consoles.

“Then I observed that some kind of bluish smoke was coming out from a semi-transparent central tube in the sphere, covering the periphery of the sphere’s interior without leaking outside at any moment.

Then the sphere began to grow and grow until it became huge like a 20-story house, but the platform and the crew remained the same size; it rose slowly and majestically and it seems I heard a very tenuous whistling.”

The sphere grew to an enormous size as it began to ascend into the sky. The doctor ran into the house, and told the family about what he had seen. Running outside, they observed the orb, which was now extremely high in the sky. It reached an enormous speed, accelerating toward Tenerfie.

Finally it dissolved into a smaller size, and disappeared. Another witness, a lady who was a relative of the patient, was watching television when suddenly the screen went blank, and her dogs began to bark outside. Running to a window, she saw the doctor’s cab, and the blue sphere above it. She also noted that the sphere was transparent, with two beings inside. Shocked, she closed the windows and doors, and began to pray.

There were several other sightings of a similar nature throughout the year of 1976 on the Island. The final “official” report was ambiguous at best.

The observance of the craft by all who saw it was accepted as genuine, although no “earthly” explanation was offered for its unique look and behavior.
On the other hand, although the witnesses of the smaller orb with aliens were classified as totally reliable, the actual presence of the beings was questioned. In other words, the witnesses were telling the truth, but what they saw was too far fetched to believe.

No other explanation was forthcoming on an official level, and the Canary Island phenomenon remains today as an authentic, well documented sighting of an unidentified flying craft with occupants.