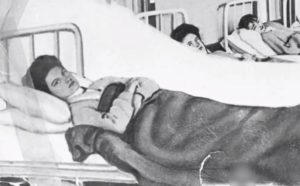 Mary Mallon was born in Cookstown, County Tyrone, in what is now Northern Ireland in 1869. She left Ireland and headed for the United States in 1883 at the age of 15, heading for New York City, where she lived with her aunt and uncle until their deaths.

Despite being alone in a large metropolis in a new country, Mary learned to make a good living as a servant in various households. For the summer of 1906, New York banker Charles Henry Warren wanted to take his family on vacation.

They rented a summer home from George Thompson and his wife in Oyster Bay, Long Island. Also for the summer, the Warrens hired Marry Mallon to be their cook. On August 27, one of Warren’s daughters became ill with typhoid fever. Soon, Mrs. Warren and two maids became ill, quickly followed by the gardener and another Warren daughter.

In total, six of the eleven people in the house came down with typhoid. Since the common way typhoid spread was through water or food sources, the owners of the home feared they would not be able to rent the property again without first discovering the source of the outbreak.

The Thompsons first hired investigators to find the cause, but they were unsuccessful. Then the Thompsons hired George A. Soper, an epidemiologist and sanitation engineer, to investigate what was going on.

He was well-versed in the disease and aware of cases involving immune carriers. He asked the family for details about their eating habits as well as the staff who prepared their food. He investigated the possibilities that the illness transferred through oysters or that the sewage pipes could have tainted the drinking water. 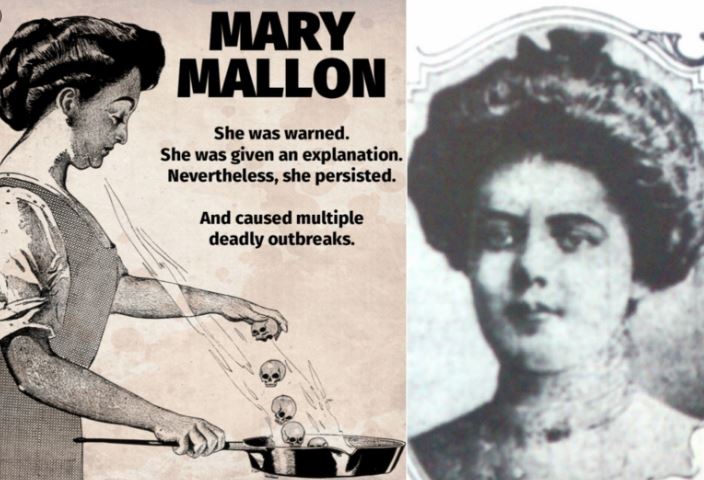 When these proved dead ends, he focused on the kitchen staff, finally pinpointing Mary as the likely culprit. After investigating her work history, he found that the families she worked for in the past had suffered from typhoid outbreaks as well.

Had she used the bathroom without washing her hands and then prepared food for the family, she would’ve been able to spread the disease. Soper learned that most of the food she served was cooked (and thus probably safe from typhoid) but that her trademark ice cream and peaches dessert could have very likely infected the family.

By this time, however, she was no longer working with the Thompsons, the family that had hired Soper. And because she never left forwarding addresses when she left a household, it took some sleuthing to track her down.

When Soper did find her, the tough Irish cook was unwilling to cooperate. Soper tried explaining to Mary that she was infecting families with her cooking and that he needed to check her feces and urine for the disease.

He may have explained the situation indelicately, however, because the story goes that before he could finish, Mary chased Soper from her kitchen with a carving fork.

Nevertheless, Soper was determined to test her for the illness, even if he had to drag her away kicking and screaming, which was exactly what happened.

Realizing that Mary wasn’t going to give up easily, Soper went to New York’s Departmen­t of Health with his evidence and quickly convinced officials to dispatch an inspector, an ambulance and a few policemen to bring her in.

Again, she slipped through their fingers and fled through the house after she answered the door. After a three-hour search, they finally found her. As they dragged her away, as she literally fought tooth and nail to try and prevent them from doing so – a female inspector even had to sit on her for the trip over to the hospital.

After testing her, it was confirmed that Mary did carry the parasite. The Department of Health offered her a deal: If she promised to give up cooking, they’d let her go. Mary obstinately refused to promise anything. So to protect the public, she was sent to North Brother Island to be quarantined in 1907.

In the meantime, the press latched on to the story and dubbed her “Typhoid Mary.” While some people were outraged at what they perceived as a violation of Mary’s civil liberties, the newspapers mostly painted her as a menace to society. One illustration depicted her breaking egg-sized skulls into a skillet.

After three years of detention, a new health commissioner came into office and released Mary under the condition that she never work again as a cook. Five years later, in January 1915, the Department of Health brought in Dr. Soper to investigate another typhoid outbreak, this time at the Sloane Maternity Hospital in Manhattan.

Twenty-five people became ill and two of them died. Soper discovered Mary herself among the kitchen staff there. Authorities took her back to the quarantine island, this time without a fight.

She remained on the island until her death, 23 years later.

History isn’t kind to Mary Mallon. One could argue that Mary heartlessly pursued her culinary career despite the knowledge that she was unleashing typhoid fever on others. However, some point out that the matter was more complicated. That she didn’t show symptoms suggests that she might not have believed what the experts were telling her about her dissemination of the disease.

It’s difficult to believe that she didn’t see a connection in the outbreaks that followed her around. To this day, historians struggle to sketch her true character and motivations.