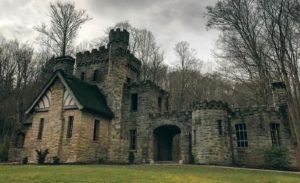 Located in Cleveland, Ohio sits an empty shell of what was once a grand gatehouse. This empty gatehouse is now home to one or more ghost.

The Squires Castle, which is now part of the Cleveland Metropark area, is located in Willoughby Hills at River Road.

Fergus Squire, a British born Standard Oil Executive, built the castle on 525 acres in 1890. Its original purpose was to be the gatehouse that was to accompany a bigger British castle. Mr. Squires wanted the castle and the land to resemble a grand estate that he had seen in England.

History of the Haunted Squires Castle

Mr. Squire and his wife Rebecca used the gatehouse as a weekend getaway, and often stayed there during the summer months.

There was one problem though; Rebecca did not like or enjoy the 525 acre estate, as her husband did.

Rebecca was a very social woman and liked to have people around her, her friends referred to her as being a very nervous and uptight person. 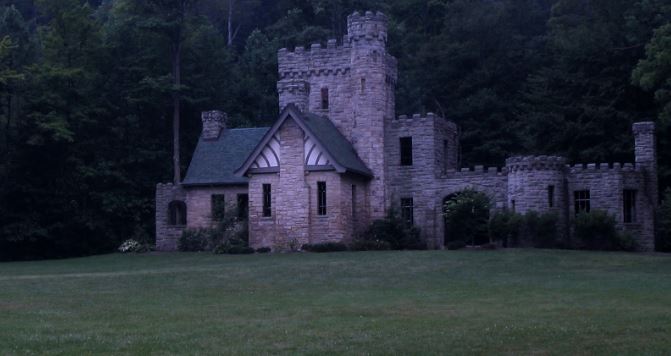 For Rebecca being so far from the city and living on such a large estate, was a nightmare. The quiet of the country and the sounds of the wild animals were often to much for Rebecca to endure.

Since Rebecca was so scared of the house, she would often roam the house at night checking every room, doors, and windows, with her trusty lantern in hand.

Unfortunately, the gatehouse was slowly starting to edge Rebecca to the point of insanity, and on one dreadful night, the house caused Rebecca her demise.

On one of her nightly roams around the house, Rebecca became frightened by a noise, and in the dark she tripped over one of her husband’s animal trophies. Rebecca fell backwards and broke her neck; her husband found her several hours later.

After the death of his wife, Mr. Squires lost interest in the estate, and never finished building his great British castle.

Eventually in 1922, Mr. Squire sold the gatehouse and the 525 acres. A few years later, it would again change ownership. The city of Cleveland would acquire the land transforming it into a Metropark. Although the house was in shambles, they were able to preserve what was left of the gatehouse shell.

The Haunting of Squires Castle

During the 1960’s and 1970’s devil worshippers, biker gangs, and other people practicing the occult often used the castle and the land surrounding it. There have been reports of several suicides that have take place, either in the castle or on the castle grounds.

Visitors of the castle claim to see apparitions walking the castle grounds, and some claim to have seen a young woman looking out the second story window. If you happen to go out at night and pass by the castle, you might catch a glimpse of the red glow of Rebecca’s lantern, walking the hallways of the empty shell of the gatehouse.

There have been several investigations and visitors have reported that their photos show images of orbs, both inside and outside of the castle.

Whether Rebecca, or some other entity haunts the castle, there is no doubt about it – the consensus is that the castle is definitely home to a ghost or two.

Visitors are welcome to visit Squires castle, it is free and open from dawn to dusk for the public. However if you choose to visit the castle you should consider bringing along your camera.