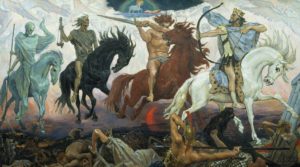 The Four Horsemen are figures in Christian theology, appearing in the New Testament’s final book, Revelation, an apocalypse written by John of Patmos, as well as in the Old Testament’s prophetic Book of Zechariah, and in the Book of Ezekiel, where they are named as punishments from God, reports ufosightingshotspot.blogspot.com.

The first horseman is on a white horse, carrying a bow, and given a crown, riding forward as a figure of Conques perhaps invoking Pestilence, Deadly Epidemic.

The second carries a sword and rides a red horse and is the creator of War.

The third is a food merchant riding upon a black horse, symbolizing Famine.

The fourth and final horse is pale green, and upon it rides Death accompanied by Hades. They were given authority over a quarter of the earth, to kill with sword, famine, and plague, and by means of the beasts of the earth.

With the current corona (covid 19) virus, the fight against this invisible enemy, despite the attempts to stop the invisible enemy the rider on the red horse slays a great number of people.

Next the rider on the black horse arrives, with the world under lockdown and a looming recession, resulting in high unemployment and bankruptcy of many factories and stores which may lead to a shortage of food supplies ultimately resulting in anarchy then Death accompanied by Hades arrive upon the pale green horse.