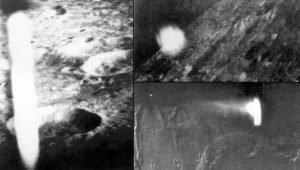 During the Apollo missions, many photos were taken by the crews including rare images of strange bright and glowing objects above, on or near the moon, reports ufosightingshotspot.blogspot.com.

The video below shows some rare images of these bright objects captured during the Apollo 11, 12, 13, 14 and 16 missions.

Apollo 13 was to be the third mission to land on the Moon. An explosion in one of the oxygen tanks crippled the spacecraft during flight and the crew were forced to orbit the Moon and return to the Earth without landing. During the orbit of the moon, the crew captured strange objects above and on the moon.

Now, there seems to be a ”Moon Industry” to have held for at least the past fifty years in the crater Plato as moving and flashing lights have been observed at the bottom of the crater.

For over hundred years the British Royal Astronomical Society has reported 1600 similar sightings of bright lights in the crater Aristarchus, lights at the eastern foot of the lunar Alps, in Mare Crisium a series of spots and streaks of light, and long light lines were seen from the crater Eudoxus.

These bright lights seem to be driven by electromagnetic energy. This energy will offer unlimited opportunities to build huge objects and to move and live in almost any environment.

These electromagnetic spaceships emit a pulsing glow under different conditions as the density of the atmosphere, humidity, velocity and the height of the spacecraft.

There can be no doubt, that many of these lights, especially the glowing moving objects, ‘electromagnetic spaceships’ are intelligently controlled.