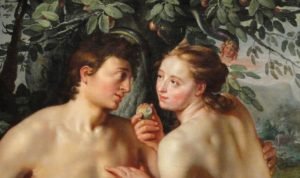 Within the framework of the biblical myth of the origin of humanity, it is believed that the first people were Adam and Eve. Scientists say that there are a whole host of factors that refute this story.

The main factor refuting the biblical myth about the origin of people is heredity. If the first people were only two, then their descendants must have had many genetic abnormalities.

For example, suppose Adam and Eve themselves were not related. Then their children should have been born with a normal set of genes. But what next?

Let’s say they were extremely fertile and gave birth to 10-20 children, most of whom survived. These children had to marry each other, and this is where the problems begin due to low genetic diversity. As we know, this is a serious factor in the degeneration of the population, scientists say.

If the parents of a child are relatives, as it would be in a hypothetical situation with the emergence of all people from Adam and Eve, then there is a high probability that the genes of such a child will have defects due to the low variability of the genetic material of the parents.

Scientists add that there are examples in history when family ties did not lead to a significant deterioration of the gene pool, therefore, if we reason completely hypothetically, then the option with Adam and Eve may not turn out to be fiction.

But the likelihood of this is still very low, so experts agree that the first people should have been more than two.