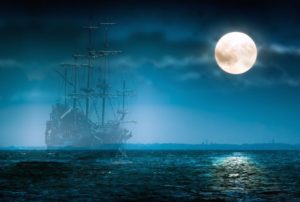 The mysterious disappearances of ships remain one of the main mysteries of the world. There are many examples in history when ships with crew members who died under strange circumstances were found at sea or on the shore.

Russian scientist Vladimir Shuleikin found out what happens to ships at sea.

In 1890 something inexplicable happened to the ship “Marlborough” – the ship set sail and never returned.

Twenty years later, the ship was discovered in the Tierra del Fuego archipelago.

Most creepy, the skeletons of twenty crew members were in such positions as if their service was going on. Everything indicated that death caught the sailors instantly.

In the thirties of the twentieth century, Russian researcher Vladimir Shuleikin worked on his book “Physics of the Sea” and unraveled the mystery of such cases as the death of the Marlboro crew.

It is not some mythical higher powers that are to blame, but specific physical processes.

“When the wind rushes over the waves of a stormy sea, infrasonic vibrations are recorded in the air, which are perceived by the human body. The ship can become a resonator for such vibrations.

“Under certain parameters, the infrasonic vibrations can simply paralyze a person. If the frequency coincides with the frequency of the circulatory system, arteries may rupture. “, – wrote Shuleikin.

Of course, this version is rather controversial, and not all scientists agree with it.