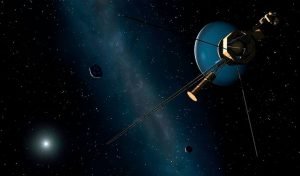 The Voyager 1 spacecraft began sending strange information to Earth a month ago, but NASA experts still cannot understand why this is happening. The solution to the problem is hampered by the huge distance that the probe has moved away from our planet.

The space probe, launched in 1977 as part of the Voyager program, is currently 14.5 billion miles from Earth, and it therefore takes nearly two days (20 hours and 33 minutes) to send a message and receive a response.

If we imagine that two people are talking in this mode, then communication is not very effective for solving problems.

What is the strangeness that scientists see in the signals from Voyager 1? The point is in the telemetry signals generated by the AACS module on board the device – experts are sure that this data cannot correspond to reality in any way.

The situation looks even stranger when you consider that the rest of Voyager 1’s systems are operating normally.

The antenna of the device is actually directed directly to the Earth, but if you take into account the telemetry data, then this is not so, which confuses NASA scientists.

What happens in interstellar space is still a mystery.

Former Navy Pilot: “I witnessed a solid black cube inside a translucent sphere”