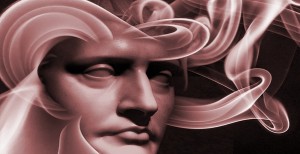 The most common modern mental picture associated with vampires is a breathtakingly beautiful but innately scary man or woman with pale skin, pointy canine fangs, and hypnotic eyes. This physical form is then coupled with an insatiable desire to suck the blood of mortal humans in order to live on indefinitely in their perfect bodies.

The recent surge in vampire popularity has led the rise in a small sect of people who wish to get their own energy boost from drinking the blood of a willing (and physically fit, clean, healthy) donor. A medical condition that reduces red cell production in the body or limits the amount of iron or hemoglobin in a person’s system can actually be a logical, scientific reason behind this desire to absorb the blood of another.

However, there are other types of modern vampires who do not uphold the tradition of drinking blood of a human. Most real vampires in their small, secret covens actually do not drink blood in order to get the required energy they need from others. Another way to look at it is that an actual vampire is not an undead blood sucker but simply a mortal human that has energy issues and needs to feed on the energy of others just to be normal.

These special individuals can be called psychic vampires since they mentally achieve their goals of absorbing energy from other humans. Most regular people have probably had an experience with a psychic vampire even if they may not have known it at the time.

You are just moving along with your life and run into people who simply exhaust you. You feel all your energy leave the room with them or even can be infused with a sense of depression when these people pop into the room with you and get physically near to you. While the majority of people who make you feel this way are probably just self centered attention addicts or tedious negative complainers, some of them might actually be a psychic vampire—zapping the energy or happiness from your body.

Many of these types of vampires may not even realize what they are doing or what is going on with their interactions toward other people. However, some have investigated the oddities of their bodies and the way they draw on the energies of people near them to discover the truth of their vampiric qualities. Throughout mythology and history several cultures have promoted this concept over many centuries, meaning that there may be early links to modern psychic vampires even though the modern media has only promoted undead blood drinkers as the only type of vampiric parasite.

Native American tribes are some of the most prominent believers of real life psychic vampires. The Hopi group of Native Americans located primarily in the northeastern region of what is now Arizona calls these unique people powaqa. A powaqa is technically a sorcerer who feeds on the life force of a human being. This life force also has a name since it is a vital aspect of the spiritual life of the Hopi—the hiksi.

Any type of person who can have power over another human being can sway on either side of the good or bad line. Many times the general public consensus is that these people are bad simply because of their needs or abilities. Yet, just like with any other type of power or even “responsibility” a person can be just as good as others can be bad. Psychic vampires can be benign in their interactions with others they absorb energy from by using their powers to focus on getting leftover energy from an object that a normal human had just recently touched instead of drawing directly from the person.

On the flip side of the coin, this type of vampire can be a true needy parasite (both literally and metaphorically since these people tend to be very wanting on their own even without their need for human energy or life force). The true definition of a real and negative psychic vampire is a being who knows exactly what he or she is doing and will use their abilities to attack your life force on purpose to truly fortify himself or herself with your personal energy.

This type of psychic vampire is highly aggressive and predatory in nature because he or she feels the necessity of stealing your energy without your permission in order to normally function or to increase their life force to larger than life proportions for personal gain. Most of the time these negative energy suckers like to do what is basically an “energy drive by” where they merely walk past their victim to get close enough to draw energy from the surroundings of the victim or even touch them (just a tap or bump will suffice) to pull directly from the person.

Psychic vampires are out there, and ones who steal your energy without permission to leave you racing into a coffee shop after bumping into you on the side walk do exist. While they are not necessarily hanging around every street corner, there are a few things for normal humans to keep in mind about energy vampires.

Those people who are extreme givers and have a tendency to be the personal doormat can be used as a metaphysical doormat as well. Highly sensitive people are very vulnerable to having their energy drawn away by psychic vampires. These special people have not developed many personal or mental boundaries (one of the reasons why they are so open, trusting, and helpful to others), but the lack of these protections makes them susceptible to energy attacks.

Also, those who have what is known as a “leaky aura” whereby you have little or no natural barriers from the everyday stressors that deplete and suck away your energy are practically a gourmet food buffet for negative psychic vampires as they will lock onto you for the simplicity of absorbing your energy and keep feeding themselves with the easy mean.

There are several ways to defend yourself from unwanted life force siphoning by a psychic vampire. One of the most popular and simplest ways is to keep a quartz crystal on your person at all times as it is supposed to be the equivalent of the undead blood suckers’ bane of garlic but for psychic vampires. Also, the building up of mental barriers through practiced visualization can prove helpful. Picture being surrounded by bright white lights or a shimmering suit of armor around your body and mind to help block unfriendly vampire energy attacks.

Avoiding psychic vampires in general is an easy way to keep these energy suckers from metaphysically pouncing on you. Keep an eye out for people who invade your personal space with intense purpose in their movements to get close to you. Watching out for people who deeply stare at you from any distance.

Paying attention to those who stare at you for extended periods of time may even help you get in tune with the psychic vampire to feel if they are pulling energy from you while it is happening. Just make sure that you are monitoring your health (mental, physical, and emotional) since negative psychic vampires go for the weakest beings.

Animals In Our Dreams: What Are They Trying To Tell Us?

Astral Projection And Astral Sex: What You Need To Know