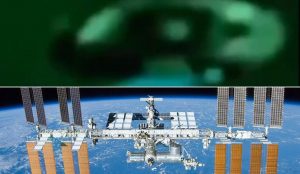 Pedro Ramirez, a popular Mexican ufologist, shared his amazing video recording with Internet users. On February 3 of this year, a specialist was watching a broadcast from a webcam onboard the International Space Station and recording the broadcast on his computer.

According to the researcher, he does this almost every day, but only this time Pedro made a truly amazing find.

On the video shown below, you can see a beautiful aurora above the Earth, against the background of which an object suddenly flies.

Ramirez slowed down the video, increased the mysterious fragment, then increased its brightness and contrast in the video editor.

It turned out that a metal disk of complex shape, unequivocally similar to the classic “flying saucer”, as if from a sci-fi movie, quickly swept near the orbital station.

Here is what Pedro Ramirez says:

“Over the past couple of years, I have been convinced that humanity’s first contact with aliens will not happen on Earth, but outside of it, and the International Space Station is the best place for such a meeting. UFOs often fly up to the ISS, but in each of these cases the webcam transmission is immediately interrupted.

A reliable source at NASA informs me that every time secret orbital fighter planes are sent to the station, practically chasing away the UFOs from the ISS. And aliens are not too happy about this state of affairs. They are well aware that the Earth belongs to us, and respect the right of mankind to dispose of the planet as he pleases.

However, in space, we should not behave this way. At best, representatives of an extraterrestrial civilization will stop trying to make contact with us, and at worst, they will lose patience and respond with aggression to aggression. Alas, the US military is too stupid to understand the seriousness of the situation.”