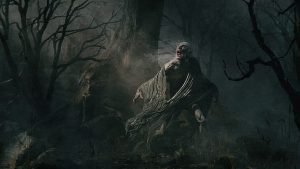 Reddit user “PerpetualConnection” recently told a story that he encountered something very strange and frightening in the night forest.

We publish his story below.

I’m a hunter, I like to hunt wild boar specifically. Though I have been deer hunting and have been known to get a turkey for Thanksgiving I mostly hunt boar. For those of you that don’t know, boars are a big problem in the United States.

A sow can have two litters a year and it’s not uncommon for a litter to consist of 10 or more pigs. Given that pigs eat anything and everything it’s not hard to see why the Department of Fish and Wildlife makes it legal to hunt them with almost no restrictions.

In my state it’s illegal to hunt most large mammals with night or thermal vision scopes, with the exception of boar and coyote. I’d been saving for a year, mostly fun money. It’s hard to explain to your wife that a scope that costs literally twice as much as the rifle I was mounting it on was worth it.

But I did it, I took it to a range and sighted it in. There was an area that was peppered with boar activity that I knew would be perfect for a night hunt. It was easily accessible with my truck with easy to find spots that I could set up in that overlooked a large easy to navigate clearing.

The night started uneventful, mostly me tinkering with my new toy, cycling through the settings. I was a little impatient, I’d spotted multiple deer but they were out of season and like I mentioned earlier, my current set up wasn’t legal for deer.

I moved to another spot I’d seen days earlier that probably wasn’t much better than my first but it gave me something to do and a new angle to look around with my new scope.

After an hour or so of glassing the area it dawned on me. This spot doesn’t have much animal activity at all, no rabbit or owls, the deer that I’d seen were hundreds of yards from where I was. Why was this pocket of land so dead at night but lively in the day?

I’d set up around 10pm and it was about 2am when I started to think about packing up, maybe setting up a target before I left and taking some practice shots. I heard a crunch come from the direction I came from before. I panned my scope over and saw the silhouette of a small bear pushing through the bushes. It’s important to note that my scope isn’t exactly “night vision”. It’s a thermal scope, kind of like a black and white version of what you see in the predator movies.

I adjusted my range and zoomed in a little. I remember jolting a little when I saw that it wasn’t really a bear, it was a man. Because he was so low and hunched over I thought I was looking at a young bear. Is that a game Warden?

It couldn’t be, I would’ve seen the headlights coming up the road from where I was perched. And where could he have walked from ? I was 30 miles away from anything and on public lands.

I was about to call out when I adjusted my sights and noticed, he was naked. No shoes, pants or anything. I remember being disturbed by his movements, like a squirrel or something. Twitchy and grabbing at the foliage, sniffing around and palming the tree.

Was that my tree? The one I’d been leaning against earlier? The thought terrified me, could he smell me ? Than he did something I still have nightmares about today. He squated and placed his hands in the dirt between his feet and stared straight up like a dog mid howl.

And I heard it, a voice coming from that direction, a very compelling female voice. “Help ! I’m lost !” There was a long pause but neither of us moved a muscle. The center of my sights was trained at the dirt in front of his feet, I couldn’t bring myself to aim directly at another person, it went against everything I’d been taught about firearms.

Were they lost? Was this some guy that had gone crazy out here ? Why was his voice so feminine? “Help! Please! I can’t walk !” The voice called out. That’s when I called bullshit. Not only could he walk, when I first saw him he was traversing the land with ease for a naked person, so good I mistook him for a bear.

That’s a fucking trap, this guy is trying to lure me to him with a damsel in destress routine. Luckily the lack of activity before had caused me to pack up most of my gear. I think I may have left behind a hat and a sitting pad but I didn’t give a shit at that moment.

I took my eyes off him for a moment to get my pack on. I buckled my chest strap and scrambled for my rifle. To my horror, he was in the same position but his face was staring in my direction and I swear I saw smile, the thermal scope has an effect that makes animal’s eyes appear white. How the hell had he heard me get up and put my gear on ? He must’ve easily been 150 yards away. “Fuck off !,” I screamed in that direction.

He stood upright and it hit me how tall and skinny he was. Easily six feet and very lean. He took a couple of long strides in my direction and I instinctively sent a round sailing above his head into the treeline. He was freaky as hell but he hadn’t really threatened me, what would I tell the cops ? I was unwilling and unready to shoot someone.

He stopped dead in his tracks and hunched down on all fours. “The next one will fuck you up! Go away!” he stayed on all fours and this time I had my sights trained on the center of him. His eyes were just above the grass like a large cat or something.

I was trying to stop my trembling and knew that my voice had cracked a little on that last warning. I was terrified, that standoff probably only lasted a minute or two, maybe less, but it felt like forever.

In an instant he bolted left towards the treeline opposite the road. So much for not being able to walk, I could barely keep him in my scope he was moving so fast.

He disappeared into the brush and I sent another bullet sailing high in his direction. I racked another round and tried to pocket that mag and swap for a fresh one, but I dropped it and didn’t bother looking for it. I wasn’t far from my truck and I wanted to get out of there.

I could hear him in the distace, yelling in this weird sound that could have been a laugh or a cry. I scrambled up the trail and arrived at my truck breathless. I tossed my gear into the cab but kept the rifle in the passenger seat and sped off.

For the longest time I told that story from the perspective of having spotted some deranged crack head living off the land like some kind of caveman. I reported it to fish and game but all they did was scold me for hunting at night alone, never received an update.

It wasn’t until I told this story at a camping trip that my nephew told me about wendigos, rakes, and skinwalkers. My story scared the piss out of him because the spot we were camping was technically the same forest I’d seen the bastard. Just 50 miles east of it.

He was so spooked his mom (my cousin) had to take him home, she was really pissed. I’ve gone down the rabbit hole one these scary stories, I’m not saying what I saw definitely was a wendigo or a skinwalker.

I’m saying that if such a thing exists, I may have dodged quite the bullet that night. Or maybe it was just a tweaker being Donnie Thornberry in the middle of the night. Either way, thought I’d share.

Believe what you like. These are events as I recall them. And no, I’m not a writer.