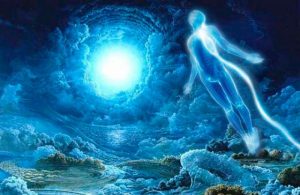 The patient’s story was published on the website of the Near Death Experience Research Foundation, which collects and studies near-death stories from eyewitnesses.

A woman named Telesa went into clinical death for several minutes in the hospital due to a blood clot in her heart, as well as problems with her lungs. Complications came after her childbirth and on her happiness during the attack next to her was an experienced medical team.

Despite the fact that her heart was not beating for only a few minutes, according to her words, Teles stayed in the “other world” for ages. Everything happened according to the classical scheme, at first she saw a bright light, and then quickly slipped somewhere out of the room and swam in a stream of light.

“This light took me high into outer space, beyond the limits of our universe, and then someone began to show visions from my life and not only my present. I was shown my past lives, which I experienced one after another.”

Also, the woman saw a strange vision with a huge sun.

“They showed me the planet Earth and then I saw myself approaching the Sun. It was a feeling as if they wanted to show me that this is where all our energy goes.”

After that, the woman seemed to dazzle with incredible knowledge.

“I suddenly understood how the Universe works, where dark energy and matter come from. But then everything disappeared and I woke up on the table.”

Commenting on such phenomena, the famous Dr. Sam Parnia, who studies near-death phenomena during resuscitation at the University of New York, says that everything described above is not necessarily proof of the afterlife.

“They often describe the soft and warm light, the observation of the doctors’ work on their body as if from the side, the presence of deceased relatives, the unwillingness to come back. All this is often considered signs of the existence of the afterlife, but most likely this is just a survival technique of our brain.

Astronomers have discovered in space “superhighways” for fast travel