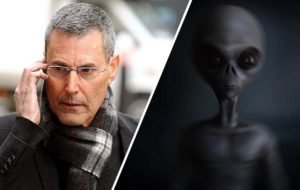 The famous psychic Uri Geller claims that the Earth is waiting for a massive invasion of aliens. He says he stumbled upon a conversation between “higher beings” 4,000 light-years away.

According to dailystar.uk,Uri Geller warned NASA to prepare for a massive alien invasion of Earth, which will take place in the near future.

Geller is confident that the giant energy source , which astronomers have discovered at a distance of 4000 light years, is most likely a message from “higher beings” from space.

He believes that the aliens are already heading in our direction.

He announced on Instagram: “A team mapping radio waves in the universe has discovered something unusual that releases a giant burst of energy three times an hour and it’s unlike anything astronomers have seen before.

“No doubt in my mind that this is connected to alien intelligence way way superior than ours.

“Start deciphering their messages! They are preparing us for a mass landing soon!”

Astronomers said they have never seen anything like the mysterious new phenomenon before. They believe that it could be a neutron star or a white dwarf with a superstrong magnetic field (magnetar).

Astrophysicist Dr Natasha Hurley-Walker of Curtin University in Australia said: “This object appeared and disappeared for several hours during our observations.

“It was kind of spooky for an astronomer because there’s nothing known in the sky that does that.

“And it’s really quite close to us — about 4,000 light years away. It’s in our galactic backyard.”