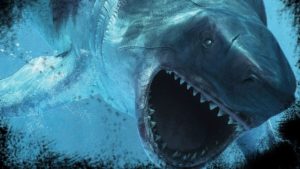 Previously, it was only known about megalodons that they were up to 17 meters in length. But at the same time, no one could say anything about the appearance of these terrible predators. The Megalodon was portrayed in different ways, but in most cases as a huge white shark.

It was possible to get at least some information about the appearance of the megalodon with the help of a study conducted by British experts. They added five modern shark species to its relatives. Due to this, it was possible to establish the approximate size of individual parts of the body of an ancient shark.

Since the megalodon had cartilage instead of bones, it was not possible to find the remains of the skeleton. The cartilage quickly dissolved and did not have time to harden.

At the same time, scientists quite often found huge teeth, which reached about 12 cm in height. Once a tooth was discovered, the length of which was 17 cm. It was by the height of the teeth that the length of the predator was calculated.

In addition, it was possible to find out that, on average, the head of the megalodon was 4.65 meters long, the fin on the back was 2 meters, and the shark’s height was 1.62 meters.

An adult could weigh up to 47 tons. Scientists posted the results of the study in an article in the scientific journal Scientific Reports.

Megalodons, according to experts, were at the top of the food chain. No one could compare with them and defeat this huge predator that lived in the water. Some of the scientists believe that in fact, these ancient sharks did not become extinct to this day.

They can hide at great depths in the oceans and only occasionally rise a little higher to find food for themselves.