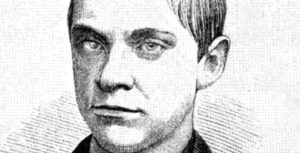 Jesse Harding Pomeroy was the youngest person ever convicted of ‘Murder in the First Degree’ in the history of Massachusetts, having been found guilty by a jury trial held in the Supreme Judicial Court of Suffolk County in December 1874.

Jesse Harding Pomeroy was born on 29 November,1859, in Charlestown, Massachusetts, to Thomas J. Pomeroy and Ruth Ann Snowman. He was the youngest of two children, his brother Charles Jefferson Pomeroy was two years older. His mother was a dressmaker.

Due to having a bad hair lip and one eye which was completely white, he suffered some degree of bullying whilst at school.

When Jesse turned 11 however, he started bullying others, and taking it onto a completely new level. He would take small children into the woods and would demand they take their clothes of. He would tie them up and beat them, poking them with sharp objects, cutting them etc.

After hurting seven kids, he was arrested and sent to the WestBorough Reform School. The Boston Globe covered this story… the last line of the article stating “It is generally concluded that the boy is mentally deficient.”

A year and a half later he was released, due to good behavior. It seems that he formulated a better plan while he was in Reform School, which was basically that he couldn’t get into trouble with the police if the kids he hurt were dead.

Ten year old Mary Curren disappeared in March 1874. She disappeared without a trace, and the police had no leads.

One month later, four year old Horace Mullen also disappeared. His body was found though, in the marshlands on the outskirts of the city. His body had been slashed with a knife and he was nearly decapitated.

When his body was found, Jesse’s name, as having a record as a child torturer, was at the top of the list. Jesse was 14 at that time. The police found a bloodstained knife in his trousers. While Jesse was locked up in preparation for trial, his mother moved house, to escape the press and censoring of her neighbors.

Once she had vacated, the landlord decided to renovate. The basement was dug up, and the body of the missing Mary Curren was found. Her remains were hastily and carelessly concealed in an ash heap.

When police asked Jesse about her body, he admitted to killing her, as well as 27 others, 12 of which he claimed he buried around his mother’s house.

At the trial, Jesse was found guilty of the two original murders, and despite the fact that he was a 14 year old boy with mild mental retardation, he was sentenced to death. This sentence was eventually over an 18 month period reduced to life in prison, and he was to be kept in solitary confinement for the rest of his life.

Jesse Harding Pomeroy spent a total of 41 years in solitary confinement. He tried to kill himself many times, without success, and repeatedly tried to escape.

In 1917, Pomeroy’s sentence was commuted to the extent of allowing him the privileges afforded to other life prisoners. At first he resisted, wanting nothing less than a pardon. He eventually adjusted to his changed circumstances and appeared in a minstrel show at the prison.

In 1929, by this time an elderly man of 70 in frail health, he was transferred to Bridgewater Hospital for the Criminally Insane, where he died just 2 years later on September 29, 1932 at the age of 72.