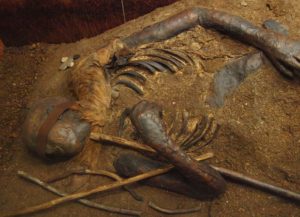 Windeby I is the name given to the bog body found preserved in a peat bog near Windeby, Northern Germany, in 1952. Until recently, the body was also called the Windeby Girl, because an archeologist believed it to be the body of a 14-year old female due to its slight build.

Prof. Heather Gill-Robinson, a Canadian anthropologist and pathologist, used DNA testing to show the body was actually that of a male. The Windeby I body is one of the best preserved bog bodies in the world.

The body was discovered by commercial peat cutters in 1952, and is now on display at The Landesmuseum at the Schloß Gottorf in Schleswig , Germany. Unfortunately, by the time the body was noticed by the peat cutters, and before the peat cutting machinery could be shut down, a hand, a foot and a leg had been severed from the body.

Despite this damage, the body had been very well preserved by the peat, and it is still an important archaeological discovery. Shortly after the discovery of Windeby I, another bog body (an adult male) was found nearby and named Windeby II.

The body appears to have a half-shaven head and a woolen blindfold tied across the eyes. Recent examinations have however established that the hair over the half of the scalp was not shaven, but had rather decomposed due to being exposed to oxygen a little longer than the rest of the body.

The “blindfold” is in fact a woolen band, made using the sprang technique, that was probably used to tie back the boy’s shoulder-length hair and which had slipped down over the face after the boy’s death.

The evidence from the body suggests that the boy had been murdered, possibly as a sacrifice or a punishment. This idea is supported by the fact that the body was discovered underneath logs and branches, which were presumably used to hold the body down.