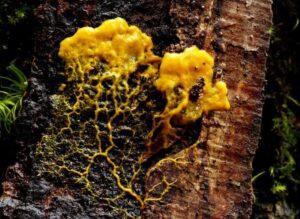 A group of scientists led by specialists from the University of Algoma (Ontario, Canada) studied the evolution of the brain on an unusual sample: Physarum Polycephalum slime molds were taken as a model object.

In modern taxonomy, these organisms belong to the taxon of protozoa and are among the oldest inhabiting the Earth.

They are often found in damp forest areas and decaying wood; colloquially people call them “slimy mold”. The organism has long attracted the attention of scientists for its strange properties.

“This is a living being, which is a mystery of nature. We know for sure that this is not a plant, but in fact we do not know if it is an animal or a fungus. It has no brain, but it is able to learn: if you combine two clots, each will pass on their knowledge to the other,” – said Bruno David, director of the Paris Museum of Natural History.

In the new work, scientists placed slime molds in the center of Petri dishes covered with semi-elastic agar gel. One or three small glass disks were placed on top of the gel on opposite sides of each dish.

The organisms were allowed to grow freely in the dark for 24 hours, and then the research team analyzed the growth pattern.

During the first 12-14 hours, the mucous mold moved evenly in all directions, but then each of the samples “threw out” an especially long branch that stretched over the surface of the gel in the direction of three discs in 70% of cases.

The discs symbolized material potentially interesting to the body as a place of life, but it remained unclear how it could navigate the terrain without prior knowledge of it.

Experiments were carried out with several variables showing differences in the behavior of the slime mold. If the three discs were stacked on top of each other, the slime mold would lose the ability to see triplicity, and reacted to it in the same way as to a single disc.

This observation made it possible to find out that the mass from the point of view of Physarum is characterized by some other factors.

The missing piece of the puzzle was found using computer simulations, which showed that, depending on the location of the discs, their mass relative to the surface of the gel changes due to different combinations of force, stress and deformation.

Explaining these findings with a more understandable example for the general public, scientists say:

“Imagine driving on the highway at night and looking for a city to stay in. You see two different light sources on the horizon: one bright point, and a group of less bright points.

“Although a single light is more intense, the group illuminates a wider area, and this is where the city is most likely located. The light in this case is analogous to the samples of mechanical deformation created by the different arrangement of masses in our model.

“Our experiments have confirmed that Physarum can physically sense them and make decisions based not just on signal intensity, but on already existing knowledge and patterns.”

This study further confirms that mechanical forces play just as important a role in controlling cell behavior and development as chemicals and genes.

The process of “mechanosensitivity” found in this simple and brainless organism is remarkably similar to that observed in all species, including humans.

Understanding how primitive creatures use biomechanical information to make decisions allows us to trace the evolutionary path of neurons in multicellular organisms, and also help to better understand our own bodies and brains.