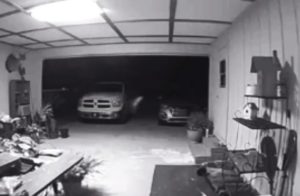 On February 20, a doorbell camera captured the shadowy figure in the middle of the night in Valdosta, Georgia, US.

The spooky video below supposedly demonstrates a semi-formed ghost leaping in between one parked car to another.

In the footage, a white object appears near a car’s wheel on the left of the screen before scampering to the right and seemingly disappearing into a second car.

Weirdly, the floating presence in its movements seems to have something like a walking gait although it does not seem to have any legs.

One internet user commented: “I wanna know who leaves their garage door open with the lights on and then just check the supposed “security camera” for anything suspicious. Sounds like a setup to me.”

But video author asserted it was not an open-door garage but an enclosed porch.

The peculiar video attracted many supernatural believers and most of them seemingly agreeing it was authentic.