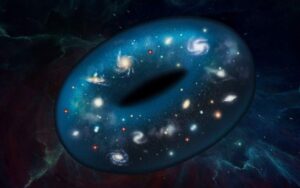 An international team of researchers from the University of Ulm (Germany) and the University of Lyon (France) came to the conclusion that the space of the Universe can be multiply connected, and we exist inside a colossal three-dimensional “donut”, which is closed on itself in all dimensions.

Scientists have come to the conclusion that if the entire Universe is closed, representing a giant volumetric donut, then all space is finite, that is, it has clear boundaries.

According to researchers, these boundaries can be almost 4 times larger than the part of the Universe we see.

Scientists came to such conclusions in the process of analyzing the microwave background of the Universe. The boundaries of the observable universe, astrophysicists argue, can be measured by the distance that light has traveled since the beginning of time.

Thus, they found out that at the time of the appearance of the cosmic microwave background, the Universe was a million times smaller than it is now.

According to the authors of the study, if the Universe is really multiply connected, then its real dimensions are three to four times larger than we can observe from the Earth.

However, it is necessary to conduct a number of studies to confirm or disprove this hypothesis.

Many scientists are confident that in order to find out what shape the universe actually has, it is necessary to start studying gravitational waves, which will be possible only thanks to the launching of more advanced satellites into low-Earth orbit and processing data on super-powerful computers.