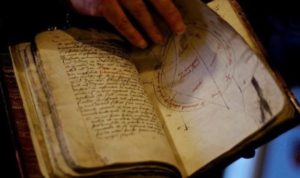 This mysterious artifact was found in 1972 during excavations in the ruins of a monastery located in Italy.

The Book of Eternity, written by the monk Federico Martelli, was finally deciphered by British researchers. They found that the mysterious book was created at the beginning of the sixteenth century.

All predictions set forth in the book were encrypted, but scientists were able to decipher them. They reported that the Book of Eternity predicted many key events that occurred in the twentieth century.

For example, the book talks about the emergence of HIV in the late twentieth century. It also predicts many natural disasters – global warming, a change of poles and the appearance of a second sun.

According to the researchers, the book contains many interesting and, at the same time, frightening predictions. For example, the monk foresaw the first contact of mankind with representatives of alien civilizations, which will happen in 3044.

The Italian seer monk Frederic Martelli is known to the world under the name Ragno Nero. The exact dates of birth and death Ragno Nero unknown.

“Eternal book” written in the style of the more ancient prophecies. It resembles the prophecies of one of the oldest books ever written by mankind — “Bundahishn, or the Foundation of Creation” which is part of the Avesta. Weird recitative, almost hexameters, predicts the future and Ragno Nero.

What is striking is that, unlike Nostradamus, he often gives alternative, offers other ways of future development, gives the possibility of choice of future events.