Multi-billion dollar tech giant Google has the most visited website in the world. One of its most popular products is Google Maps, which handles nearly billion mapping requests every week.

Thanks to its detailed satellite imagery and street-view service, from the comfort of your own home you can travel to every corner of the world – well, almost everywhere….

Google’s digital Earth contains hundreds of blurred-out buildings, and indecipherable pixels – censoring the very planet that we live on. There are some places that Google just doesn’t want us to see. So what, exactly, are they hiding? Almost immediately after Google Maps was made live in, users started noticing something strange: censored locations all across the globe.

Google has responded to its users’ suspicions by explaining that its aerial imagery is gathered, from external sources. Third-party providers are required to follow the laws of each country that they are documenting, and in some instances this might mean blurring images of sensitive locations. Supposedly this is for security reasons, like protecting places against terrorist attacks. 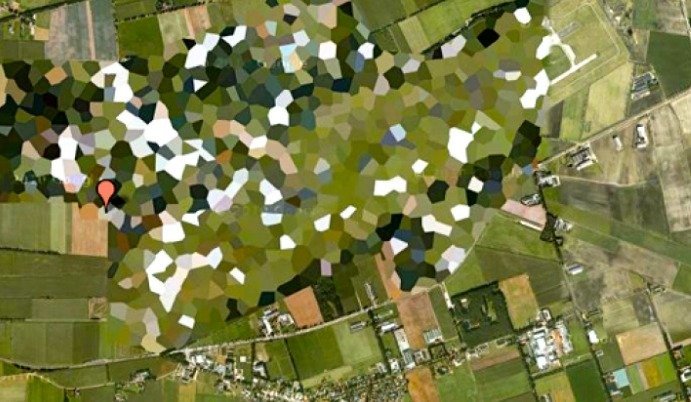 But is that really all there is to it? In, Doctor Richard Boylan discovered three mysterious rectangles on Google’s satellite imagery. All of these black patches were in remote locations: central Greenland, Nunavut in Canada, and the third in Alaska, near an Arctic army test site. According to Boylan, these censors are deliberately concealing ancient alien beacons.

He believes an advanced civilization in our galaxy has constructed hi-tech systems in space, to facilitate intergalactic travel. His claims have been confirmed by several reports about Apollo and Soviet astronauts, who spotted a possible alien satellite during their respective space missions.

In May Apollo astronauts Tom Stafford, John Young, and Eugene Cernan travelled to the Moon and orbited it, as a training mission for the Apollo Moon landing. Conspiracy author Thom Burnett suggests that during their flight, the Apollo crew photographed an unusual artefact in Earth’s orbit. It was described as a ‘monolith’, like the one featured in Stanley Kubrick’s movie: A Space Odyssey.

Official reports state that Apollo encountered several problems during its mission, which included communication failures and a fault with the command module hatch. Theorists speculate that these problems were not an accident, but rather the result of interference with the Monolith. Is it possible that this so-called alien beacon was emitting energy signals that caused Apollo’s module to malfunction? According to American scientist Dr. Michael Wolf, this extra-terrestrial communication device does indeed emit light and sound signals. Richard Boylan claims that in, of these beacons were retrieved by secret military astronauts, and placed in snowy remote locations, where they could be tested. Could this be what Google censored?

Years after they were discovered, these black marks disappeared from Google Maps without any explanation. It’s rumoured that the beacons were returned to space by NASA and the U.S Government. However, there is little evidence to support this claim.

Skeptics argue that this censorship is either the result of technological glitches, or simply national security protocol. The monolith may bear the same shape as the blacked out images on Google Maps, but the technology required to recover such huge objects from space just wasn’t available in.

What’s more, it would have been incredibly difficult to conceal the beacons on such a covert space mission. Nevertheless, Google is responsible for censoring some controversial locations, like America’s High Frequency Active Auroral Research Program, or HAARP.

This confidential research centre in Alaska has carried out operations since the early nineties, and is linked to deliberate weather control and environmental disasters.

HAARP is one of several locations that the U.S Government demanded be censored.

Even after the project closed down in, only low resolution images of the facility were available. So while our mysterious monoliths might not be alien beacons, there is every possibility that America was indeed concealing a top-secret military operation.