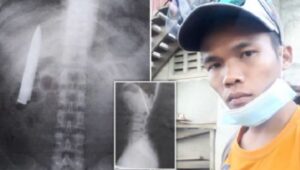 The street scuffle for Kent Ryan Tomato ended with a knife in the chest, with which he walked for about 15 months.

A 25-year-old boy was attacked by a gang of teenagers in the city of Kidapawan. He had no idea that a knife blade was stuck in his body.

Only 15 months later, when the Kent got a job at a mine and underwent a medical examination, the doctors noticed something wrong on the X-ray.

The man from time to time felt a stabbing pain, but he could not even think that there was a knife in his chest. Most likely, during the incident, part of the blade broke off and remained in the soft tissues. Miraculously, the heart remained whole.

Kent did not want to sue the unscrupulous doctor. He returned to him so that he pulled out the foreign body and stitched.