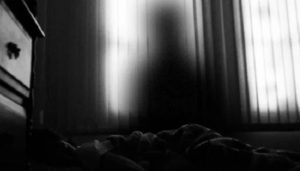 In 2006, on one forum, a woman wrote a terrifying story. She swore that everything she writes was true…

I moved into my house five years ago. In the last two years, there have been strange things happening. It all started in October of 2004.

I noticed strange footsteps but shrugged them off, thinking there was probably an explanation for them. My sixteen-year-old son, Michael, slept in the only downstairs bedroom while his little sister and I have our own bedrooms upstairs.

I would wake up in the morning with Michael sleeping on my bedroom floor. He, at first, heard strange noises and soon saw shadows moving across the room. He came running from his room one day because a plug flew from the outlet. I put it down to electrical faults. He’s felt something brushing him, too.

I have been with my partner, Mike, for a year now and he moved in with me in April. At first, Mike couldn’t sleep with the noise of someone moving about up and down the stairs. He always checked, but there was never anything there. He would always say, “Did you hear that?” I was just used to hearing them.

Four months ago, Mike was sitting at the computer beside Michael’s bedroom door and he jumped up in pain. He lifted up his shirt and found a deep scratch on his stomach. There were no sharp instruments about and no possible explanation for this.

The computer always acts up for him but no one else in the family. I am also catching shadows out of the corner of my eye and have been putting it down to my imagination.

We were lying in our bed two weeks ago watching TV. I lie nearest the doorway and caught a shadow going into my daughter’s bedroom. Mike jumped up and told me he saw it too. For once, I was completely freaked out. I had to sleep on the other side of the bed.

Everything was forgotten, but two days ago Mike was sitting at the computer again, holding a piece of drawing paper in his lap. The paper hit him in the eye somehow and took a chunk from his cornea. He was admitted to the hospital and is in complete agony.

He cannot explain how the paper hit his eye from the angle he was holding it on his lap, but we know that even if he tried to do it to himself it would be impossible.

At first, I thought it was just a mischevious ghost of some kind, but now I am starting to get very worried with this thing assaulting my partner. It is no longer mischevious, but evil. I wonder if it is the shadow that has always been with me, that I have always seen from the corner of my eye…or if it’s something that was already in the house.

Two weeks ago, my son came in screaming from the bathroom saying he’d seen a bloody face wrapped in a dirty sheet. He killed himself last Friday and we are all devastated beyond words.

His suicide note said, “I got it mom. Check the camera” 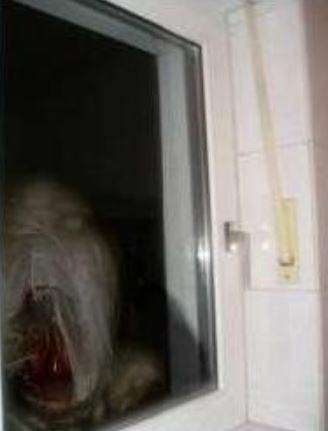