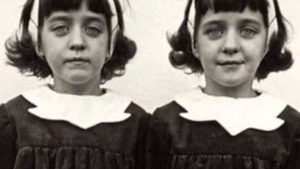 Do you believe in reincarnation? The mystery of life after death is one of the most complex and worrying for people since the beginning of times. Throughout the centuries, many have tried to explain it: religion, science, they are all looking for a solution.

The phenomenon of reincarnation, the belief in the rebirth of the soul or the mind after death in another body, has been present in humanity since the ancient times. One of the most famous cases is The Pollock Twins.

Today, we are gonna tell you about them. John and Florence Pollock had a normal life in Héxham, England, with their two daughters, Jacqueline, 6 years old, and Joanne, 11 years old. It all changed for them on a Sunday, the 5th of May of 1957, when Jacqueline and Joanne died in an accident. They were on their way to church with a friend of the family when they were tragically hit by a car.

They both died instantly. John and Florence were devastated by this premature loss of their kids, but they kept on with their lives, hanging onto the hope that they would, someday, be blessed with another child. Their prayers were answered a lot earlier than they had expected.

Soon, they found out Florence was pregnant again. The doctor said they were only gonna have one kid, but John wasn’t really convinced and had the feeling it was gonna be twins. Against all odds, John’s prediction about the twins turned out to be true, and on November 4th 1958, two little girls were born, Gillian, and Jennifer.

These parents’ happiness turned into surprise when they observed that, even tho they were identical, they had very curious birthmarks. Jennifer had a spot on her forehead, right where her deceased older sister, Jacqueline, had a mark as well.

They both had a mark in their waist, something weird was going on… When the twins turned 3 months, John and Florence decided to start over and they moved to Whitley Bay, facing the North Sea.

When the twins began to talk, they realised the girls were more special than what they might have seemed at first. They could remember their older sisters’ past, who, as we already know, had died a year before they were born.

When they went back to Hexham, the twins started pointing to places where they had never been before. When they went by the school the two sisters had attended, they remembered it. They knew their old house and people in the village.

They also had the same habits, the same way of talking… On top of that, one of them seemed to be older, and the other one accepted to have her sister take care of her.

They also recognized the old dolls and called them by the names Jacqueline and Joanne had given them in the past. Gillian remembered the life of her sister Joanna, dead at the age of 11, while Jennifer remembered Jacqueline’s, who died at the age of 6. One time, their parents heard them talking about the accident, describing the feelings they had.

Also, the twins had a terrible phobia to vehicles. Once the girls turned 5, the memories of their deceased sisters suddenly vanished, from one day to the next, and went on with their normal lives. Five years is the age scientists say is the limit to remember past lives.

Because, even tho the Pollock twins’ case is one of the most famous, there are many many others. Doctor Ian Stevenson researched thousands of cases of children who seemed to have reincarnated.

Do you think the Pollock twins’ case is real or just the last hope of a pair of devastated parents? Do you believe in reincarnation?