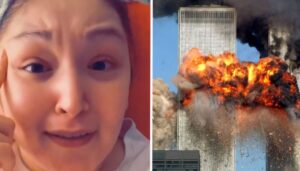 An interesting video has appeared on TikTok in which a shocked woman tells the story of her four-year-old daughter.

Responding to another TikTok, which said, ‘Tell me a time when your child told you a past life story,’ Riss White opened up about a disturbing account given by her young daughter a couple of years ago.

While watching the terrible events of September 11, 2011, a 4-year-old girl told the details of that time from her past life.

According to Riss White, the girl’s mother, her daughter immediately remembered the Twin Towers, despite her small age. She then revealed that she worked at the North Tower.

The little girl pointed to one of the towers and said, “Hey mom, I used to work there”. When Riss asked her when this was, her daughter simply responded ‘before’.

“She said that one day she was working and the floor got really hot. So she stood on her desk because the floor was too hot.

“And she said that her and her friends were trying to get through the door but they couldn’t open the door so she jumped out of the window and flew like a bird.”

Maybe Rissa White’s daughter somehow got information from some source, but at her age it would hardly have been possible to come up with such a story and generally deliberately talk about the events of those years.

Dr. Jim B. Tucker has studied cases of past life memory in children from all over the world. By studying children who claim to remember past lives, Tucker has accepted the possibility of the existence of reincarnation.

At Penn State, Tucker explained that children who claim to remember a previous life have been found in many parts of the world.

According to Tucker, reincarnates tend to find themselves in the same country they were living in during a previous life. Tucker suggested that an emotional connection to places could explain this trend or that perhaps the process of reincarnation involves some form of geographical constraint.