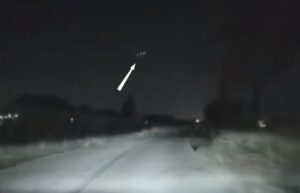 The curious dashcam footage of a South Korean driver shows a trio of lights suddenly appearing in the night sky before they disappear into thin air.

The mysterious video have been captured on March 24, as the witness was driving home from work near the city of Daejeon.

Around the 30-second mark, a white light emerges in the sky, followed by two more that show up one at a time in sequence, creating a distinct line. But within seconds, all three of them seem to have faded away.

Those lights or that object did not leave any piece of evidence neither in the sky nor on the ground which would have been used by agencies to identify this mysterious object.

The video was posted on various social media channels where it received mixed reactions.

No official information has been provided by the authorities regarding the authenticity of this video.