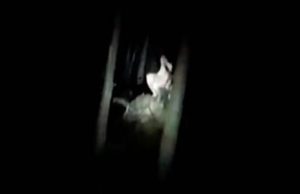 The mysterious video starts with the person heading into darkness as screams in the background are heard. The noises get louder as he moves further into the woods.

He then points his flashlight in front of him and there appears to be a white creature right before him.

A disturbing growl originates from the same area and the creature starts moving but the cameraman turns around and run in fear before we get a closer look.

Numerous believers said the creature was a legendary “skin crawler” or “nightcrawler.”

“It’s called a crawler, they are likely carnivorous and have been sighted all over the USA and Canada,” one commentator suggested.

Another said: “They’re probably one of those most common cryptids actually. It might be curious of you so make sure to lock your doors.”

It is hard to find details of the cryptid due to the poor quality of this footage, but Nightcrawlers appear to be relatively short creatures (approx. 1.5 meters) with most of their height being made up of their legs as they possess an extremely small upper body.

It is an extremely thin, white humanoid with no discernible arms. A larger specimen appears to have webbing connected from each knee to the torso.