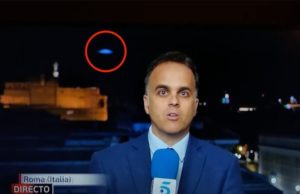 In the curious video of a Spanish news broadcast, a mysterious UFO can be seen gliding through the night sky behind a journalist residing in Rome.

The odd occurrence was noticed by an alert audience watching an evening broadcast on Telecinco TV last Friday night.

As reporter Dario Menor starts his Rome report, a strange bright object unexpectedly appears on the screen behind him and flies across the sky.

While the UFO seems to be blue in the footage taken by the witness, he clarified that it originally appeared white as the event occurred and only took on the blue hue when he filmed his TV with his smartphone.

As to what the phenomenon might have been, the hypotheses include drones, the reflection of light on the surface, the secret government spaceship, or aliens plane.