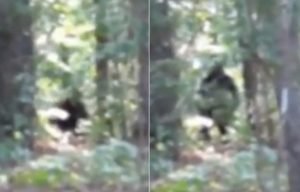 Footage appearing to show a Bigfoot in a forest in the United States has left people intrigued – and experts admitting that there is the possibility it is real.

A video clip of a large ape-like creature filmed through the treeline was posted on the Instagram account Cryptid University – a profile dedicated to telling “stories about Big foot and other Cryptids.”

It appears to show a large black creature and was believed to be filmed in a forest in the U.S state of Georgia in the Southeastern area of the country.

Initially, the unidentifiable creature appears to be crouching, before standing up tall to reveal its enormous height.

The footage is admittedly shaky, but it hasn’t stopped people from believing that it is real and admitting that they would be terrified to witness it.

One person wrote: “Best footage I’ve seen in a while I understand the shakiness I would’ve been pooing in my pants woooooow that thing was huge.”

Another also noted the size of the creature, writing: “That thing is huge!”

Others however were more sceptical about the authenticity of the imagery.

Someone commented: “They do all sorts of things for attention down in Georgia.”

The footage has divided people online, but one expert claims there’s a slight chance it could be real.

Breedlove said: “The subject seems to be very large but the movement possibly gives away the potential for some trickery.

“The subject seems to be looking down at the ground as it turns indicating it might be a person in a suit who is having some difficulty judging the forest floor beneath them.

“It makes me think this is more than likely a hoax.”

But, Breedlove, whose production company Small Town Monsters focuses on mystery and folklore, admitted there is always the chance it’s real.

He said: “The thing does appear to be large though, so maybe it’s real? These videos always leave us with more questions than answers.”

Researcher discovered another mysterious structure on the moon