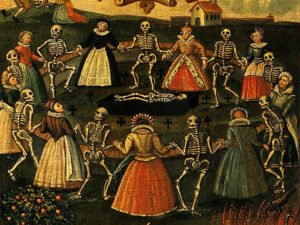 Mass hysteria and collective delusions are two forms of mass psychological illness that are, even today, not well understood. They have afflicted all every society, and continue to crop up even in the modern world.

While the term “mass hysteria” is often used as a blanket term describing both mass hysteria and collective delusions, the two phenomena differ quite a bit in their presentation.

Collective delusions do not feature physical illness. More often than not, they involve the fear of something attacking the community, such as a razor-wielding madman. The idea of the imagined threat, the delusion, spreads through the community as the panic grows. 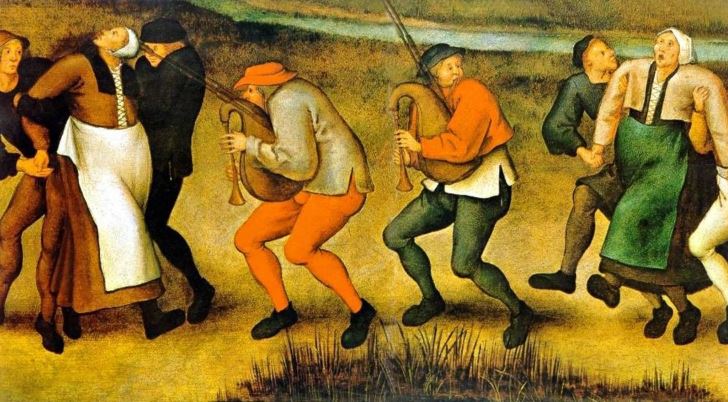 On the other hand, mass hysteria is a form of conversion disorder, where deep seated anxieties are converted into physical symptoms. These symptoms come in two broad classifications: mass anxiety hysteria and mass motor hysteria. Mass anxiety hysteria is characterized by symptoms such as fainting, vomiting, and feelings of dread or paranoia. It is short lived–the symptoms only last a couple of hours, while the outbreaks themselves last a few weeks at most.

Mass motor hysteria is characterized by bizarre body movements and strange behavior. These outbreaks can last upwards of a year, possibly longer.

They were more common in the pre-modern world, and in modern third world countries, where the belief in the supernatural was more prevalent and the threat of demonic possession was seen as a very real and present danger. One example of such an outbreak in the modern world was the Tanganyika Laughter Epidemic.

Perhaps the most bizarre and infamous outbreaks of mass hysteria occurred on and off throughout the Middle Ages. These featured mobs of people spasmodically dancing through the streets of medieval cities, often to the point they died of exhaustion.

One of the earliest recorded outbreak of hysterical dancing occurred in Aux-la-Chapelle in 1374. Sufferers formed circles, joining hands. They danced for hours at a time, until they fell down exhausted.

Those afflicted with the hysteria seemed oblivious to what was going on around them. They suffered delusions as well, claiming that they were being tormented by spirits, whose names they shouted as they danced. Others saw angels and saints.

The worst cases would have been truly frightening to behold. Some of the dancers fell into something akin to epileptic seizures. They would have violent convulsions and foam at the mouth, but still continue to dance.

By July of that year, the dancing plague had spread to what is now the Netherlands. In Belgium, dancers wore garland in their hair and attracted crowds of curious onlookers, some of whom found themselves sucked into the spectacle.

In some cases, the dancers took over churches. People said prayers for the unfortunates, thinking they were possessed. Priests would attempt exorcisms on the dancers, only to find themselves being berated by the afflicted and the crowds they drew as well.

Communities in the affected regions were at a loss as to what to do about these poor souls. Ordinances were passed to appease the dancers, such as bans on pointed toe shoes which had become popular during the plague (however, square toes were allowed.) The sight of pointed shoes enraged the dancers, sending them into even more hysterical fits. The same went for weeping and the color red.

The priesthood found itself the victim of this seemingly random rage. It feared that the mania would spread to the upper classes (most of the dancers were lower class) and completely upset the social order. Here is the social element that is always present both in collective delusions and mass hysteria.

The dances were release valves for years of pent up stress and anxiety. It was a way for the lower classes to rise up against the powers that be. By adopting the role of the hysteric (although they did so unintentionally–they actually were sick), the peasant could finally stand up to their oppressors.

Still, the rebellion as it were only lasted so long. Priests continued to perform exorcisms, noticing that they seemed to be the only treatment that helped the afflicted. After about ten or eleven months, the spastic dancing finally faded away.

Similar outbreaks occurred in Cologne and Metz in 1375. Smaller in comparison to the dancing plague of the previous year, the disturbances still brought chaos wherever they went. A new phenomena occurred during these later outbreaks–the imitators.

There were those who saw the attention the dancers were getting, and decided to intentionally imitate the bizarre movements. This is in contrast to people who were actually afflicted, who to a large extent could not control themselves.

The imitators spread the illness as readily as the actual sufferers–mass hysteria can literally be spread by sight and sound.

Dancing manias continued on and off for the next two centuries. Perhaps the most famous occurred in Strasbourg, France in 1518, when 400 men, women, and children danced uncontrollably in an outbreak that lasted for months. Dozens died from heart attacks and exhaustion.

St. Vitus and the Dancing Plagues

The cultural and religious traditions at the time played a huge role in how these dancing plagues played out. It has already been said how the belief in possession as an ever present danger helped to fuel the outbreaks.

A more divine figure might have had a role in the outbreak as well. St. Vitus was a Sicilian who was martyred during Diocletian’s persecution of Christians in 303AD. His body was transferred to Corvey in 836, when miracles were ascribed to his tomb. As his worship spread, people sought his assistance in all sorts of problems.

The Legend began at the beginning of the fourteenth century that St. Vitus prayed for God to protect sufferers of the dancing mania, if they worshiped and fasted before the day of his martyrdom was commemorated. legend held that when the prayer finished, a voice came from Heaven saying “Vitus, thy prayer is accepted.”

Another figure called on to protect the dancers was John the Baptist. Worship of both Vitus and John were characterized by reenacting ancient pagan forms of worship, such as having people and animals jump through flaming hoops.

These festivals were often host to raucous dancing and partying. It has been suggested that dancing of the worship festivals might have been the catalyst for the form that the dancing plagues took. 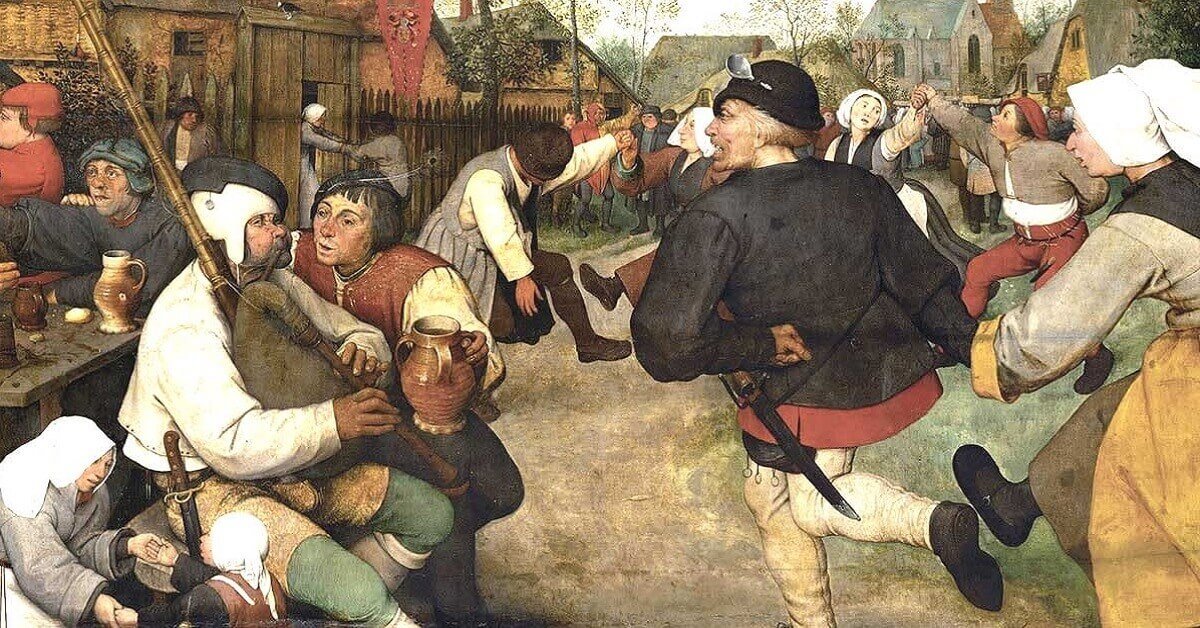 Broader issues were at play in addition to the festivals. The Black Death had ravaged the world only twenty years earlier, within the living memory of many people alive when the dancing manias started.

The trauma from the Black Death permeated the entire culture, fundamentally changing how people viewed the world. No doubt there was an element of that trauma that played a part in the manias to come.

In addition, the region had suffered terribly since the ravages of the plague. Civil strife was rampant, with barons fighting one another incessantly in petty wars over territory. There were no laws to protect the common man, and most were at the mercy of the local noble’s whim.

In addition, the Rhine and Maine rivers had flooded, ravaging the region. These social and environmental powers conspired to make the stresses that were to be released by the ceremonial worship of St. John and St. Vitus, but the revelry of those festivals spun out of control.

The outbreak in Strasbourg had similar underpinnings. There had been a terrible famine in the time leading up to the outbreak. Food prices soared. Farmers came into the city seeking food.

A weakened population in an overcrowded city made the perfect target for an outbreak of disease, in this case leprosy and syphilis. These stressors provided the fuel for the fire of the dancing mania.