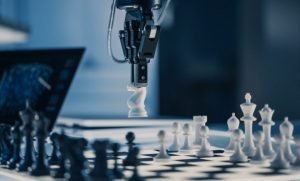 When the history of the appearance of robots is written, perhaps in the first chapter this case will be described: a seven-year-old boy had his finger broken by a rival robot during a chess match in Moscow.

There is some debate as to exactly what happened, but it looks like the kid made a move faster than the robot expected, which may have led to the accident.

The video footage of the incident shows how the robotic hand grabbed and pinched the boy’s finger with a sharp movement. After a few seconds, the people at the table rush to help the child, and he manages to free his finger from the paws of a mechanical opponent.

The fact that a chess robot broke a seven-year-old boy’s finger during the international forum Moscow Chess Open was told by the President of the Moscow Chess Federation Sergey Lazarev.

According to him, the child made a move, after which he hurried, not waiting for the machine to complete its action. As a result, the robot grabbed the boy by the index finger and squeezed it hard.

Surrounding people helped to remove the finger from the robotic arm, but it was not possible to avoid a fracture. Lazarev said that the boy was put in plaster, and the next day he continued to play.

The child’s parents want to appeal to the prosecutor’s office, but the vice-president of the Moscow Chess Federation, Sergei Smagin, believes that the boy himself violated the rules. He noted that this robot has been playing for about 15 years, and during this time such incidents have not happened.

At the moment, there is no talk of banning the chess robot from participating in tournaments, Smagin said.

“It is absolutely safe. It will be necessary to analyze why this happened. The robot has a very talented inventor, it may be necessary to install an additional protection system.

“To be honest, I’m not an expert in how the robot is set up, but the case is amazing, considering how many events have taken place with its participation,” said Sergei Smagin, Vice President of the Moscow Chess Federation.

The video depicting the incident was published by the Baza Telegram channel. The video shows that the boy’s hand was above the chessboard when the robot was still making its move. The robot did not like that the boy was in a hurry?

Recall that Russia was suspended from participation in all world tournaments due to the attack on Ukraine.