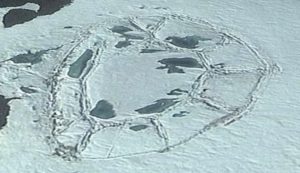 Antarctica is an almost untouched territory, where temperatures can drop as low as -90° C. Most of the mainland is explored using satellites that regularly send images to scientists.

The latest image captured gave scientists serious thought. The picture shows ovals, which are quite wide (120 meters or more). The most mysterious thing is that in fact, no one could leave traces, since the territory of Antarctica is a remote, untouched corner of the planet.

According to the archaeologist at University College London, Mark Altavil, in any other part of the Earth, experts would not be so puzzled, since what they saw can easily be called a trick of a man. However, there are no people in Antarctica, so what the ovals do in the center of the mainland is an open question.

At first, scientists thought that the pattern was created by the wind, and there are plenty of winds in Antarctica. Stock streams of air sometimes form something similar, snow dunes are called sastrugi.

The experts immediately discarded the wind activity, since the sastrugi always run parallel to the direction of air flows.

Only a trip to Antarctica will help resolve the issue once and for all, but, of course, no one organizes the expedition because of the high cost.

What these circles are is still a mystery.