Possibly one of the greatest ghost photos of all time. This picture was taken in 1963 by Reverend K. F. Lord at Newby Christian Church in North Yorkshire, England. It has been a controversial photo mainly because it’s just too good.

The shrouded face and the way it is looking straight into the camera makes it look like it was posed – a clever double exposure. Yet supposedly the picture has been scrutinized by photo experts who say the image is not the result of a double exposure. 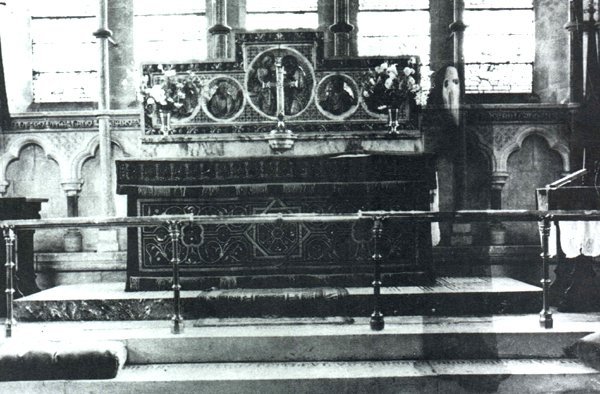 The Reverend Lord has said of the picture that absolutely nothing was visible to the naked eye when he took the snapshot of his communion table. Yet when the film was developed, standing there was this strange cowled figure.

The Newby Church was built in 1870 and, as far as anyone knows, did not have a history of ghosts, hauntings or other unusual phenomena. Those why have carefully analyzed the proportions of the objects in the photo calculated that the specter is about nine feet tall.

The thought of the picture being a fake itself came under attack, K.F Lord Felt annoyed by this. Especially since he was an honest Reverand. The Ghost was also Nine Feet tall And from this arose some trouble in finding out how Lord would have made his image so large.

The photo was eventually sent away to be examined, and Scientists revealed that the Photo had not been tampered with whatsoever and was genuine. This made the photo one of the most famous ghost pictures in the world, both because of its ‘Perfection’ and the fact that it is legitimate.

The spectre has since not been seen at all, And had not been seen before the photo had been taken either. This arises more mystery as to what the Spectre was and why it has never appeared (Save one photo). Because of its dress, many people believe that this creature was the ghost of a monk.

The Union Screaming House Of Missouri