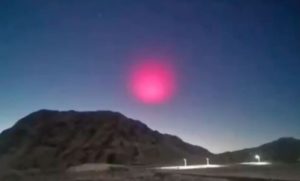 The meteorite fell on December 23 in Qinghai Province (PRC). According to eyewitnesses, immediately after the explosion of the meteorite, a giant spherical structure appeared over the impact site, which hovered over the Dealing highway.

No one could understand what this pink-red cloud was.

Bizarre footage has emerged of a pink glowing object suspending in the dark sky. In the video, the bright pink-hue UFO appears to be stationary as the motorist drives on the deserted highway.

The object seems to be glowing around a sphere and it can be seen from various angles in the nearby area.

Many viewers said it resembled a moon but some said the light gathered like a cloud formation.

There are speculations that the glowing pink light could be emitted from the bolide but experts have yet to identify it.