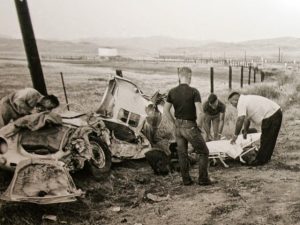 Our world is filled with unbelievable occurrences of coincidence and synchronicity that defy explanation. Are these incredible true stories of mere coincidence… or maybe the hand of fate?

The stories of identical twins’ nearly identical lives are often astonishing, but perhaps none more so than those of identical twins born in Ohio. The twin boys were separated at birth, being adopted by different families. Unknown to each other, both families named the boys James. And here the coincidences just begin. Both James grew up not even knowing of the other, yet both sought law-enforcement training, both had abilities in mechanical drawing and carpentry, and each had married women named Linda.

They both had sons whom one named James Alan and the other named James Allan. The twin brothers also divorced their wives and married other women – both named Betty. And they both owned dogs which they named Toy. Forty years after their childhood separation, the two men were reunited to share their amazingly similar lives. (Source: Reader’s Digest, January 1980)

A falling baby, saved twice by the same man

In Detroit sometime in the 1930s, a young (if incredibly careless) mother must have been eternally grateful to a man named Joseph Figlock. As Figlock was walking down the street, the mother’s baby fell from a high window onto Figlock. The baby’s fall was broken and both man and baby were unharmed. A stroke of luck on its own, but a year later, the very same baby fell from the very same window onto poor, unsuspecting Joseph Figlock as he was again passing beneath. And again, they both survived the event. (Source: Mysteries of the Unexplained)

A bullet that reached its destiny years later

Henry Ziegland thought he had dodged fate. In 1883, he broke off a relationship with his girlfriend who, out of distress, committed suicide. The girl’s brother was so enraged that he hunted down Ziegland and shot him. The brother, believing he had killed Ziegland, then turned his gun on himself and took his own life. But Ziegland had not been killed. The bullet, in fact, had only grazed his face and then lodged in a tree.

Ziegland surely thought himself a lucky man. Some years later, however, Ziegland decided to cut down the large tree, which still had the bullet in it. The task seemed so formidable that he decided to blow it up with a few sticks of dynamite. The explosion propelled the bullet into Ziegland’s head, killing him. (Source: Ripley’s Believe It or Not!)

On 2002, Seventy-year-old twin brothers have died within hours of one another after separate accidents on the same road in northern Finland. The first of the twins died when he was hit by a lorry while riding his bike in Raahe, 600 kilometres north of the capital, Helsinki. He died just 1.5km from the spot where his brother was killed. “This is simply a historic coincidence.

Although the road is a busy one, accidents don’t occur every day,” police officer Marja-Leena Huhtala told Reuters. “It made my hair stand on end when I heard the two were brothers, and identical twins at that. It came to mind that perhaps someone from upstairs had a say in this,” she said. (Source: BBC News)

Poker winnings, to the unsuspected son

In 1858, Robert Fallon was shot dead, an act of vengeance by those with whom he was playing poker. Fallon, they claimed, had won the $600 pot through cheating. With Fallon’s seat empty and none of the other players willing to take the now-unlucky $600, they found a new player to take Fallon’s place and staked him with the dead man’s $600.

By the time the police had arrived to investigate the killing, the new player had turned the $600 into $2,200 in winnings. The police demanded the original $600 to pass on to Fallon’s next of kin – only to discover that the new player turned out to be Fallon’s son, who had not seen his father in seven years! (Source: Ripley’s Giant Book of Believe It or Not!)

Three suicide attempts, all stopped by the same Monk

Joseph Aigner was a fairlly well-known portrait painter in 19th century Austria who, apparently, was quite an unhappy fellow: he several times attempted suicide. His first attempt was at the young age of 18 when he tried to hang himself, but was interrupted by the mysterious appearance of a Capuchin monk. At age 22 he again tried to hang himself, but was again saved from the act by the very same monk.

Eight years later, his death was ordained by others who sentenced him to the gallows for his political activities. Once again, his life was saved by the intervention of the same monk. At age 68, Aiger finally succeeded in suicide, a pistol doing the trick. His funeral ceremony was conducted by the same Capuchin monk – a man whose name Aiger never even knew. (Source: Ripley’s Giant Book of Believe It or Not!)

A novel that unsuspectedly described the spy next door

When Norman Mailer began his novel Barbary Shore, there was no plan to have a Russian spy as a character. As he worked on it, he introduced a Russian spy in the U.S. as a minor character. As the work progressed, the spy became the dominant character in the novel.

After the novel was completed, the U.S. Immigration Service arrested a man who lived just one floor above Mailer in the same apartment building. He was Colonel Rudolf Abel, alleged to be the top Russian spy working in the U.S. at that time. (Source: Science Digest)

Three strangers on a Train, with complementary last names

In the 1920s, three Englishman were traveling separately by train through Peru. At the time of their introduction, they were the only three men in the railroad car.

In 1953, television reporter Irv Kupcinet was in London to cover the coronation of Ellizabeth II. In one of the drawers in his room at the Savoy he found found some items that, by their identification, belonged to a man named Harry Hannin. Coincidentally, Harry Hannin – a basketball star with the famed Harlem Globetrotters – was a good friend of Kupcinet’s.

But the story has yet another twist. Just two days later, and before he could tell Hannin of his lucky discovery, Kupcinet received a letter from Hannin. In the letter, Hannin told Kucinet that while staying at the Hotel Meurice in Paris, he found in a drawer a tie – with Kupcinet’s name on it! (Source: Mysteries of the Unexplained)

John and Arthur Mowforth were twins who lived about 80 miles apart in Great Britain. On the evening of May 22, 1975, both fell severely ill from chest pains. The families of both men were completely unaware of the other’s illness. Both men were rushed to separate hospitals at approximately the same time. And both died of heart attacks shortly after arrival. (Source: Chronogenetics: The Inheretance of Biological Time, Luigi Gedda and Gianni Brenci)

While on a business trip sometime in the late 1950s, Mr. George D. Bryson stopped and registered at the Brown Hotel in Louisville, Kentucky. After signing the register and being given his key to room 307, he stopped by the mail desk to see if any letters had arrived for him. Indeed there was a letter, the mail girl told him, and handed him an envelope addressed to Mr. George D. Bryson, room 307. This wouldn’t be so odd, except the letter was not for him, but for room 307’s just-previous occupant – another man named George D. Bryson. (Source: Incredible Coincidence, Alan Vaughan)

A novel that predicted the Titanic’s destiny, and another ship that almost followed

Morgan Robertson, in 1898, wrote “Futility”. It described the maiden voyage of a transatlantic luxury liner named the Titan. Although it was touted as being unsinkable, it strikes an iceberg and sinks with much loss of life. In 1912 the Titanic, a transatlantic luxury liner widely touted as unsinkable strikes an iceberg and sinks with great loss of life on her maiden voyage. In the Book, the Month of the Wreck was April, same as in the real event. There were 3,000 passengers on the book; in reality, 2,207. In the Book, there were 24 Lifeboats; in reality, 20.

Months after the Titanic sank, a tramp steamer was traveling through the foggy Atlantic with only a young boy on watch. It came into his head that it had been thereabouts that the Titanic had sunk, and he was suddenly terrified by the thought of the name of his ship – the Titanian. Panic-stricken, he sounded the warning. The ship stopped, just in time: a huge iceberg loomed out of the fog directly in their path. The Titanian was saved.