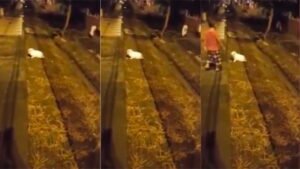 Mysterious footage of running legs without a torso went viral on the web.

This video was published by the conspiracy channel “The Hidden Underbelly 2.0”. Unfortunately, the researchers did not provide information on where this mysterious incident occurred.

The legs running without a torso in a dark street have been called a complete mystery by researchers of the paranormal, although they were not ready to call the figure a ghost.

The child watching the white rabbit was, apparently, the main subject of the shooting, and the running ghostly stranger just accidentally got into the frame. The child points to the rabbit and watches with enthusiasm as it jumps along the road.

At some point, the rabbit shows concern and runs away just at the moment when the mysterious legs run past him.

Some users believe that the rabbit was not scared enough, which may indicate video editing. On the other hand, the boy and the rabbit might not have seen the strange runner.

One of the commentators jokingly suggested that this was the invisible man who forgot to put on his shirt. Another joker remembered the young wizard Harry Potter, who, having thrown on an invisibility cloak, did not make sure that his legs were also closed.

More skeptical observers have put forward a prosaic explanation that this scene is somehow the result of a camera error or, otherwise, just a clever hoax.