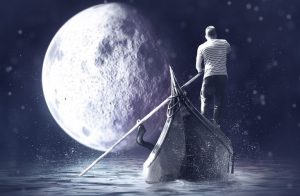 Police and medical personnel notice that crime and accidents increase at the full moon. Many others have noticed the moon’s effects. Scientific studies found correlations

It’s a scientific fact that the moon affects oceans’ tides. Folklore and the paranormal recognized the moon’s influence on humans, while traditional scientists denied this, although the human body is nearly 80% water. The relationship between moon phases and human behavior is intriguing.

Hollywood lore is that Lon Chaney, Jr., The Wolf Man, turned into a wolf when the moon was full, the basis for the belief that people become werewolves during this phase, which isn’t a part of traditional werewolf legend and documentation.

Eighteenth-century English jurist Sir William Blackstone wrote that a “lunatic” was one who lost his reason, but had lucidity depending on the moon’s phases. Charles Hyde, in 19th century England, used the defense that the moon turned him into a lunatic during his murder trial.

When psychiatrists and other doctors began to do statistical studies of the moon’s effects on human behavior, their results were scoffed at by those of the establishment; however acceptance appears to be growing.

University of Miami psychologist Arnold Lieber and his colleagues collected data on homicides in Dade County over 15 years involving 1,887 recorded murders. They matched the incidences of homicide with the moon’s phases and found that the two rose and fell together.

As the full and the new moons neared, the murder rate rose sharply and declined during the first and last quarters. They repeated the experiment using Cuyahoga County, Ohio’s murder statistics with duplicate results.

An earlier report by the American Institute of Medical Climatology to the Philadelphia Police Department had similar results. The full moon marks a peak in various crimes including murder, reckless driving and arson.

Dr. Edson J. Andrews studied 1,000. 82% percent of postoperative bleeding crises occurred nearer the full and the new moon, although fewer operations were performed at those times.

His findings were published in the Journal of the Florida Medical Association.

In tropical South American and Southeast Asia rain forest countries where most of the hardwood is harvested, contracts are linked to the moon’s phases. Trees are felled during the waning moon, as close to the new moon as possible.

During the waxing and full moon, sap rises in the trees, attracting hordes of deathwatch beetles that devastate crops.

Curtis Jackson, controller of Southern California Methodist Hospital, discovered that more babies are conceived on the waxing moon. He studied 11,025 births over six years and found that nearly 1,000 more children were conceived during the waxing phase.

German researcher Dr. W. Buehler analyzed 33,000 births. There was a significant prevalence of male births during the waxing moon.

Two studies published in the British Medical Journal’s December 23, 2000 issue contradict each other on whether or not animals bite people more during the full moon.

Chanchall Bhattacharjee and colleagues at the Bradford Royal Infirmary in England reviewed 1,621 patients admitted to the emergency room between 1997 and 1999 for animal bites. The chances of being bitten were twice as high during or around the full moon.

Simon Chapman at the University of Sydney in Australia compared dates of admission for dog bites to Australian public hospitals with dates of the full moon over a one year time frame and found no correlation between the full moon and the bites.

He said he doesn’t know the full moon causes animals in England to bite more humans and has no effect on when they do in Australia.

Hidden Treasure of The Copper Scroll