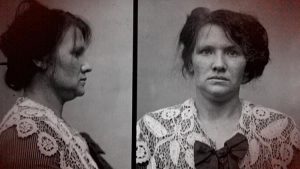 Dagmar Johanne Amalie Overbye was a Danish serial killer believed to have killed between 9 and 25 babies, but convicted of murdering 9, one of which was her own, between 1913 and 1920 in Copenhagen Denmark, although the true number is likely to have been considerably higher than that, as it is believed the authorities downplayed the number of potential victims.

Overbye was working as a professional child caretaker, caring for babies born outside of marriage, murdering her own charges. She strangled them, drowned them or burned them to death in her masonry heater.

The corpses were either cremated, buried or hidden in the loft. Overbye was convicted of nine murders, as there were no proof of the others. Her lawyer based his case on Overbye being abused herself as a baby, but that didn’t impress the judge.

After her arrest, as many as 180 children were reported missing, all apparently disappeared from Overbye’s ‘baby farm’ although it is possible that parents reported their babies missing because they feared their own deeds may be exposed.

Her gruesome crimes were discovered quite by chance at her apartment in Copenhagen’s Vesterbro district on Englhavevej.

A young mother, Karoline Aagesen, had placed a small classified advertisement in the paper saying she was looking for a family to adopt her new-born, illegitimate daughter in July 1920, and had Dagmar Overbye not read it and taken the child, and had Miss Aagesen not regretted her decision the following day and asked to have her baby back, the terrible crimes would not have been discovered.

When Miss Aagesen asked Overbye for her child to be returned, Overbye said she couldn’t remember the address of the family she had given her to. Aagesen found this a little strange, and reported the incident to the police.

The police then visited Overbye’s apartment on Enghavevej, where they found first the baby’s clothes and later the remains of her bones and skull in the ashes of the stove. Overbye was arrested and confessed to the murders of 16 babies, but she was only ever convicted of murdering nine because of lack of evidence.

It is believed, though, that she was responsible for killing 29 children, in a terrible story that began some ten years prior, where a young Overbye gave birth to her first child – which died under suspicious circumstances. It is now thought this new-born suffered the same fate as the others.

Overbye moved to Copenhagen in 1915, and a year later, she was operating a kind of unofficial adoption agency between mothers of unwanted babies and families looking to adopt. The babies, however, never became part of the loving families their mothers dreamt of.

Aagesen testified that she had paid around 200 kroner to Overbye for taking the child and finding her good foster parents, as had the other mothers who had innocently handed over their infants, believing that they were offering them the chance of a better life. For many of whom were live-in servants, the sum was the equivalent of a year’s wages.

Dagmar Overbye was found guilty of killing all nine infants and sentenced to death, the first woman to have been given the death penalty since 1861. The reigning King of Denmark at the time, Christian X, however, commuted the capital sentence to life imprisonment, believing that a modern, enlightened Denmark, such as his did not convict its women to death. Instead, Overbye died in prison in 1929, aged 43.

The Werewolf of Wysteria: Albert Fish