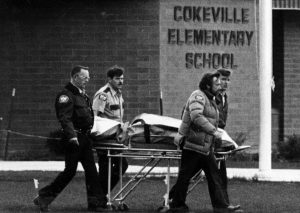 On May 16, 1986, former town marshal David Gary Young and his wife Doris Young took 154 children and 13 teachers hostage at Cokeville Elementary school in Wyoming and kept them at bay with a shopping-cart sized bomb attached to five hairpin-trigger blast caps. And he wouldn’t release them until he was given 300 million dollars.

After a two-and-a-half hour standoff, the children were becoming restless, so the teachers lead them in prayer.

“The kids were sitting in circles, and, as I looked over at them, you could see the circles would be saying a prayer. And they were all doing that. It was amazing to me.”

The praying appeared to make David Young agitated and he decided to leave the room. Before leaving the room, David Young attached the bomb’s detonation device to his wife’s wrist. At one point she lifted her arm sharply and the bomb went off prematurely, injuring Doris Young while David Young was out of the room. Returning to the scene, David Young shot his wife, then himself.

All the hostages escaped, though 79 were later hospitalized with minor burns and injuries. The story runs deeper. Bomb experts called out to the scene were stunned. They couldn’t figure out why the school was still intact when a bomb that size should have obliterated the entire side of the building leaving everyone – the hostage-takers and the hostages – all dead.

Then the children began to tell stories of angels who appeared to them and instructed them to move to a corner of the classroom because the bomb was about to explode. Some reported seeing beautiful figures in white while others said that they saw long-dead relatives telling them not to be afraid. Many said later that there was an angel in the room for every child and that each was protecting their charge. Some children said that they didn’t see anything, but rather heard disembodied voices telling them that the disaster was about to happen and that they would be spared.

One child, named Nathan, explained what happened to him at that precise moment:

“I was sitting in the classroom playing with a toy when something made me look up. That’s when I saw the angels. They were shiny, with flowing white robes. Some were holding hands. They glided down through the ceiling, then hung in the air for a second. I felt totally safe. Everyone seemed to have an angel. They came down next to us. My angel was a beautiful shining woman. It was almost as if she landed on my shoulder. She said, “Don’t be scared, Nathan. Get up and go to the window. The bomb is about to go off.” I did just what she said. Other children started doing the same thing.”

Inside the classroom, Doris Young attempted to put a bent on the situation. She told the children:

“Some day you’ll be famous for this. You’ll write about it in your journals and you’ll have a great story for your grandchildren.”

Although not quite for the reasons the unstable woman believed, as it turned out, her proclamation would indeed ring true.

Most of them want to explain this as sheer luck. Why would the children lie? And were the little souls in a condition to make up stories after such a traumatizing incident?