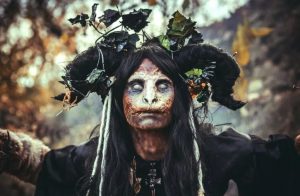 A woman lived along the banks of the Yazoo River as an hermit in the 1800s. She was as loathsome to look at as she was mean. People avoided her and no one knew her name. She was an object of scorn and animosity.

In quiet voices, people whispered rumors about her and her vile pastime. It was said that, she would lure unsuspecting fishermen into her hovel and kill them in various ways, including by poison.

Then, she would bury them in a secluded nearby hillside and do a dance on their graves. No one bothered to confirm this by looking for the men’s bodies.

Joe Bob Duggan, a youth, knew of these stories and her reputation. He was guiding his raft down the Yazoo one autumn night in 1884 when he heard moaning from inside her hovel. He steered toward her abode to investigate, then walked toward this place of horror.

Carefully, he looked through a window and saw a sight that filled him with terror. Two dead men were lying on the floor and the woman was dancing about them, dressed in a filthy dress, arms outstretched in incantations.

Joe Bob ran back to his raft and guided as swiftly as he could toward town to tell the sheriff what he had witnessed. What he saw with his eyes confirmed the rumors he had heard.

One account states the sheriff and his deputies rode to the hovel on horseback, while another declares they rode in a horse and buggy.

When the sheriff reached the house, he pounded on the door, but no one answered. The men broke down the door and entered the house. The corpses of the dead men Joe Bob had seen were gone.

The group went to the attic where they found the skeletons of two men hanging from the rafters. Emaciated cats crept underneath the bodies.

They heard the sound of footsteps, crunching on the fallen leaves. They saw the old woman running towards the swamp area. The sheriff yelled at her to stop, but she paid no heed. Joe Bob would, later tell his children and grandchildren that she looked like a ghostly scarecrow and did so, even on his deathbed.

By the time they reached the old woman, she had sunk into quicksand up to her neck. Her scarred, grotesque face was all that they saw. She shouted to them that she would return.

Everybody in the town hated her. She would rise out of her grave on the morning of May 25, 1904 and burn down the town. With having uttered that, her head disappeared into the quicksand.

Her body was retrieved with the aid of tree branches and pitchforks. She was buried in the Glenwood Cemetery with a stone marker with the initials T. W. inscribed on it to mark her graves location.

The sheriff ordered the strongest chain he could find to be placed around her grave. His words were that if she could break through the chain and burn down Yazoo, she deserved to burn it down. 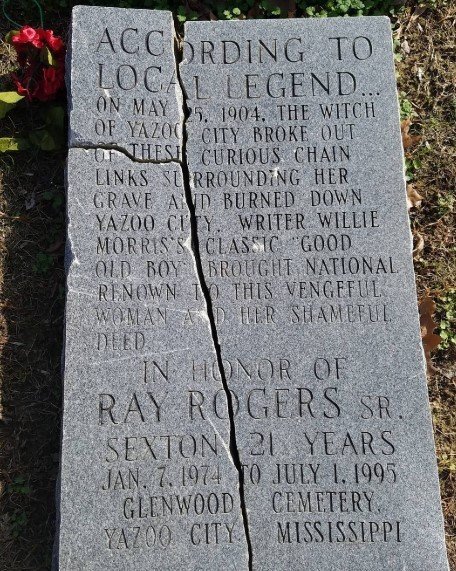 Twenty years later, people’s memories of the witch and her curse faded. Most people had forgotten about it or attributed it to the demented ravings of a maniacal old woman.

On the morning of May 25, 1904, a woman who lived on Mound Street was getting ready for her wedding. She went into the parlor to get either her trousseau or wedding gifts to show friends.

Again, the accounts vary, however, as with the sheriff and deputies riding horses or in a buggy, this is an insignificant matter. Both accounts agree on what the men saw in 1884, the gravesite and the horror that was to soon visit Yazoo City.

Apparently, a servant had knocked a lamp over in the parlor and there was a small blaze. There were strong, unusual for that time of year winds that quickly spread the fire into the adjoining building, then spread out into more homes and into businesses.

Firefighters from Jackson and Greenwood tried to help the ones from Yazoo City. It was to little avail. No business buildings were left standing in the downtown district and many fine residences were destroyed. The city was in ruins.

The next day, some of the residents who remembered the witch’s curse visited the gravesite. One account states the chain was broken in two and the other, that a link was missing. Again, the variance is insignificant. The fact is that the chain was broken by brute superhuman force.

This story has been passed down through the generations, varying only in trifling details, but the accounts agree that there was an evil ugly woman who lived by the banks of the Yazoo River and Joe Bob Duggan saw what he did. Two skeletons were found, hanging from rafters, as well as the emaciated cats in the attic.

The ugly spiteful woman drowned in quicksand after she said she would return on May 25, 1904 to burn the town down. There was a fire that devastated the town on that date.

The grave with a stone bearing the initials T. W. is in the center of Glenview Cemetery and the broken chain still surrounds it.
Witch’s curse? Coincidence? Legend? People embroidering an event that happened twenty years before the fire?

The Glenview Cemetery’s records were destroyed in the fire, so there is no longer documentation of those who were buried, on the tombstones and markers. A caretaker of the cemetery has said he gets more question about the witch’s grave than any other and that it is not uncommon to find fresh flowers on the grave.

It is highly unlikely if the mystery of the witch, the prophecy, the fire and the chain will ever be solved after a century later.