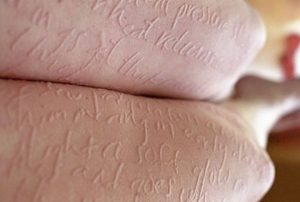 Have you ever woken up in the morning to find strange and unexplained scratches or bruises on your body and in places you couldn’t have reached yourself.

Well … even if you haven’t millions of others have. In fact, there are internet forums where people describe the phenomenon and desperately appeal for explanations and help.

In most cases the scratches are mild and disappear in a day or two and the vast majority of these cases never get medically reported as the sufferers usually convince themselves that they are somehow self inflicted.

Others attribute the injuries to bug bites, allergic reactions or even something that happened during the day that they failed to notice at the time.

Usually the incident is forgotten as soon as the bruises vanish or the scratches fade. However, persistent sufferers go to great lengths to rule out these possibilities. There have been cases of sufferers wearing gloves to bed, fumigating their houses and even taking full medical allergy tests all to no avail.

In one case a woman went to the extreme length of having a friend watch her while she slept and still woke up with new bruises and scratches. According to her friend nothing strange happened except for a period when the victim tossed and turned restlessly for about 15 minutes.

Doctors try to put forward rational explanations for this condition such as the skin disease Pityriasis Rosea but most of these thoroughly fail to convince those that have actually experienced it happening to them.

The phenomenon has persisted through the centuries and in the past has been explained by demons, having-a-devil-on-your-back, goblin fury, divine punishments and even encounters with incubi or succubae.

In some cases the victims report that in addition to the scratches and bruises they have other more disturbing injuries.