Skip to content
Facebook Instagram Twitter Telegram YouTube Pinterest
1.1K
An out of place artifact is the name given to an object that defies conventional science by its simple presence. There are quite a few of them out there and all of them have been found in deposits that are far older than humanity.

Some of them have been found embedded in coal lumps, other in deep mines. The material around them was hundreds of millions of years old and their origins remain unanswered.

This hammer was found by a local couple, Max Hahn and his secret lover, while out walking along the course of the Red Creek near the town of London.

They spotted a curious piece of loose rock with a bit of wood embedded in it and took it home with them. It lay unnoticed until their son cracked the rock open ten years later.

To their astonishment, there was a modern-looking hammer encased in the stone. It began to attract attention in the 1980’s and has puzzled the world ever since.

The metal hammerhead is approximately 6 inches (15 centimeters) long and has a diameter of 1 in (25 mm), leading some to suggest that this hammer was not used for large projects, but rather for fine work or soft metal.

According to geologists who examined the object, the rock around it is over 100 million years old. Surely, human history doesn’t stretch that far back. The metal was subjected to several tests. Sophisticated electron microscopes showed it was made up of 96.6 percent iron and that it had been forged.

The handle also pointed towards the genuineness of the hammer. The wood it was made of had become petrified and this process is known to take a long time to occur.

Another question is raised by a scratch mark made in 1942, when the rock was cracked open. The scratch exposed the bare metal under the layer of rust. In more than 70 years, that exposed metal has not corroded one bit, despite the hammer being made of iron. 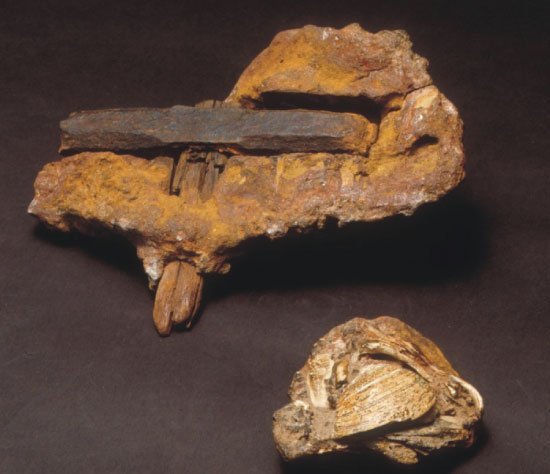 When researchers examined the inside of the handle, the mystery grew again. They found out that it had turned to porous coal.

Petrified wood is formed when flowing water constantly replaces wood particles with minerals but coal forms under different conditions, usually requiring fire and/or high pressure. There is no known process through which carbonization and petrification could happen simultaneously.

People have proposed many explanations regarding the origin of this out of place artifact. Some have said that it’s the product of a hoax but the age of the rock and the petrified handle cannot be faked.

Others say that either aliens or human time travelers lost it eons ago. Some people have said that this hammer attests to the presence of humans and that we’ve been on this planet for far longer than mainstream science accepts.

None of these theories are nailed down so if any one comes up with a fitting explanation, the owners of the hammer would be happy to hear it.