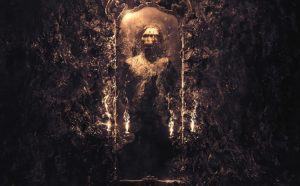 Diana T. (zenonas.sg-host.com reader) shares her story about encounter with the unexplainable.

I don’t tell this story often, only to my husband and immediate family. It scares me to even think about it. First, I want to tell you that I am a Christian, Southern Baptist in fact, and it is against everything we are taught to believe in “ghosts” or anything involving evil spirits.

I am a firm believer in God, therefore I have to accept the fact that there is evil and sometimes it introduces itself as it did with me. My husband was working the night shift and it was routine for us to talk on the phone for hrs. at a time being that I worked days.

I made my nightly call as I crawled into bed. I usually talked to him until I couldn’t keep my eyes open and then went to sleep. When I called, he was on the other line and was to call me back when he got off.

I was already sleepy so, with the lights on and the cordless phone next to my head, I closed my eyes waiting to fall asleep. Now, I am familiar with remedial dream studies and am aware of REM’s and the unusual tricks our brains can play on us in this state.

What I am about to tell you has NOTHING to do with dreams. I am absolutely positive about that. I hadn’t fallen asleep, but I was peaceful and resting waiting for my husband to call.

Within a few minutes, I felt a deep sensation of not being “there”.

Like I wasn’t in my room anymore and wherever I was, it was cold and very eery for lack of a better word. I was trying to open my eyes but something was nudging me not too. I was scared and trying to figure out what was going on and I was totally aware of myself and the fact that I wasn’t asleep.

When that finally sank in, my eyes opened to find something I will never forget. I was in my room, but it was backwards. Everything was backwards. Pictures, candles, tables and the most noticeable thing was my clock. It was upside down blinking 12:00 as if it had lost power.

I knew it hadn’t been storming and it and I mean IT, something foreign to my body, sank in. This deep dark feeling that there was something there and it was waiting for me. At this point, I don’t know how to say it except that I left my body because I didn’t physically feel as if I had left my bed but I knew that some part of me had gotten up. I went towards my door and found that the order of the rooms in the house were also backwards.

Nothing was where it was supposed to be, the best way to explain it is to say I was in a mirror. It was pitch black and I can’t express enough the feeling I had of complete terror and evil. I looked to find the way out, when I got to the back door I opened it to find my dog with her back towards me.

I called her and when she turned around I thought my heart actually stopped. She looked rabid. Raring her teeth at me and what appeared to be blood dripping from her teeth. She looked as if she was going to eat me alive and the growling noise that came from her mouth was not my dog.

She was like a child to me and you know the sounds they make. Whatever that thing was, it wasn’t my dog. I slammed the door shut as fast as I could and ran to my bedroom. I guess I was thinking if I could hide my head under the blanket I would be safe from whatever it was that was in my house.

I got into my bed and I could feel some sort of warm air hitting my face as I layed there frozen with fear. After a couple of seconds, I realized it was someone’s breath as if they were right next to me.

At that moment I actually thought I was going to die. I knew nothing else to do but to pray. I begged God to help me and to take me away from whatever was there. I felt a tear fall down my face. I was ready to die.

It couldn’t have been more than a couple of seconds later I felt something warm touch my face, I felt safe all of the sudden. Like everything was going to be ok. I layed there a second and realized it was a hand and it was touching the side of my face.

I began to cry out of relief and confusion. My heart skipped a beat and my eyes opened to find my room, in order. Everything was normal and it was exactly midnight. I was frozen with fear for 28 minutes when the phone rang.

It rang 4 or 5 times before I could get my hand to my head where the phone was still laying. I said hello, I think, I can remember my husband saying my name and it felt like heaven.

I tried to tell him what had happened but I was exhausted and couldn’t bear to think about it any longer. I begged him to come home and he did. Later he said he didn’t know what had happened he just new he sensed a great deal of fear in my voice and knew something was wrong.

When he did get home I asked him what had taken him so long to call and he told me: “I did call, but it was busy for half an hour. Who were you talking to anyway?” No one, I said, absolutely no one.