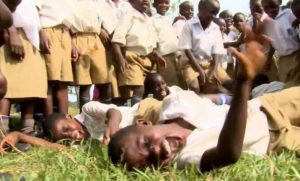 In 1962, the Tanganyika region, now called Tanzania, suffered a mass epidemic, unlike anything seen throughout history in the rest of the world. Its onslaught was fast and the level of contagion super extreme, but even to this day we have no idea what it was, where it came from, or where it went.

Although that all sounds horrifying, it’s in fact almost beautiful, because in this odd case the only symptom of the contagion was laughter, or at least that seemed to be the only symptom. Presenting the Tanganyika Laughter Epidemic…

On January 30, 1962, at a mission-run boarding school for girls in Kashasha, a small village on the banks of Lake Victoria, a single schoolgirl began laughing without cause. Within minutes other students followed, and it might have been considered by the teacher as bad behavior except that it became clear the children could not stop. By the end of the hour the full student population of 159 pupils were laughing uncontrollably and wouldn’t stop for another 16 days.

What it was replaced with was something far worse. The children had been changed somehow by their experience. Some carried on exactly as they always were, but the large majority could almost be described as zombies. They would interact with those around them, but they seemed to have no emotion and no interests or needs.

New symptoms began to appear including pain, fainting, respiratory problems, rashes, but worst of all, sudden attacks of crying, and random screaming from children that were otherwise devoid of emotion.

Studies and tests were done, and blood samples taken from the children during the laughing attacks were further analyzed now at top laboratories in Cairo and Kinshasa, but still no abnormalities or signs of an actual contagion could be found. Amongst the educated the cause of choice became Mass Psychogenic Illness (MPI).

In other words it was all in the minds of the people afflicted and not caused by food poisoning, toxins, or other elements in the environment. The locals on the other hand at the time and to this day blame witchcraft.

It’s been over 50 years since the children of Tanzania were afflicted with the Tanganyika Laughter Epidemic and those that were afflicted are now grown and entering their senior years. As they aged into adulthood the zombie like emotionless states began to fade, but in a way the Tanganyika Laughter Epidemic is still present amongst the female children of later generations.

Mass fainting in Tanzania believed to be caused by mass hysteria is an unusually common phenomenon throughout the region, and although it has never been officially linked to the Tanganyika Laughter Epidemic, one still has to wonder.

Since 1962 researchers around the world have been asking a simple question with difficult answers; could it happen again, or more importantly – could it happen in a first-world city? In 2007 a similar epidemic struck Virginia, but this time there was no laughter. In the Blue Ridge Mountains of Virginia a young boy began suffering twitching that was accompanied with tremors, dizziness and headaches.

As was the case in Tanzania, there was no apparent cause and it began to spread quickly throughout the population of children. One child who escaped the epidemic described the experience at the school; “You don’t know how to avoid it. You don’t know if you’re next, or if your friend is next, or if it’s an epidemic.” It vanished as mysteriously as it came and yet again we have no answers.