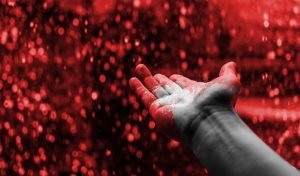 Red Rain also know as Blood Rain is a rarely occurring weather phenomenon in which falling rain can take on the appearance of blood. The majority of these events occur in Southeast Asia and have been documented in modern times since the 1800’s. Recently a series of colored rainfall occurred over Kerala, India during the summers of 2001, 2006, 2007, 2008, and 2012.

The recent rains, as those that occurred in the distant past, understandably were a source of fear and panic. Red Rains of past time were often attributed to acts of gods or were thought to be supernatural omen of some doom to come. Now in modern times these same fears take on modern themes.

The first modern explanation is that the red rains are the result dust suspended in the air by desert dust storms is washed from the sky by falling rain. It is the rain water mixing with the suspended dust that causes the odd color rains that are witnessed.

The second explanation suggests the red rains are caused by volcanic eruptions expelling dust and ash into the air. This is similar to the desert storm explanation previously mention and only differs by what mechanism suspends the dust during a rainfall.

The third and fourth explanations start to get a little strange.

The third explanation states that the red rains are caused by meteoric air burst that is believed to have occurred at the beginning of one of the events . This is base on witness reports that there was a flash of light and a loud boom before the red rains began. Once again the meteoric airburst is the mechanism that suspends the dust into the air which is mixed with rain water as it falls.

The fourth explanation involves extraterrestrial life forms. Two physicists Godfrey Louis and Santhosh Kumar from the Mahatma Gandhi University in Kottayam, Kerala, posted an article on an online site in 2003.

The paper “Cometary panspermia explains the red rain of Kerala” in the on-line, non-peer reviewed web site http://arxiv.org. Their premise was that the red rains were of an extraterrestrial biological origin.

The pair later published another paper on the same site titled “New biology of red rain extremophiles prove cometary panspermia” detailing how they had found cells in the red rain that were apparently alive but lacked DNA.

It should be noted that all examinations were performed by the two physicists and without going into boring details their methodology was faulty. Not surprising since neither were biologist. The other problem with their work is that it fails to explain why Southeast Asia should be a magnet for Red Rains and extraterrestrial life forms.

The final explanation comes from a joint report commissioned by the Government of India’s Department of Science & Technology, the Center for Earth Science Studies (CESS) and the Tropical Botanical Garden and Research Institute (TBGRI).

The report finds that “Red” color which was given to the rain was not because of meteoric burst, volcanoes, desert storms, or extraterrestrial life forms but was due to the presence of large amount of spores of a lichen-forming alga belonging to the genus known as Trentepohlia.

The area which had the most rain fall had shown plenty of lichens forming. The area was visited several times throughout the years to do additional research and it was evident that the trees, rocks and even the lamp posts were covered in large amounts of Trentepohlia spores which were also evident within the rain water which was collected.

Finally the report stated that there were no meteoric, volcanic or desert dust found within the water.

This final explanation is the most reasonable. It requires no special circumstances such as volcanic eruptions, meteor airburst, or extraterrestrial life forms. It only requires a natural phenomenon that has be occurring for hundreds of years and which just happens to coincide with the occurrences of the red rain.

Still, reasonable explanations aside this is still a creepy odd occurrence and will generate fear and panic mainly because of its infrequent occurrence. It simply does not happen often enough to become mundane.

So in the future when new red rains fall it is likely new explanations will be put forward. Perhaps one theory will involve a government conspiracy angle. Whatever this new theory is let’s hope it is as entertaining as the ones that preceded it.

Unexplained scratches: Why people get strange scratches on their body?